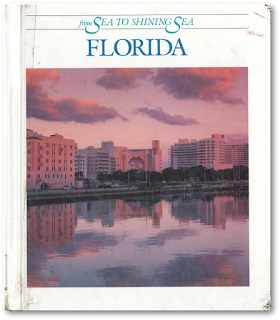 In my day job, I am a public librarian. I have always had a deep-seated fondness for books and it shows at Imaginerding and with my chosen career of librarianship. When I was doing some collection management (technical term), I ran across an older children’s book that covered Florida. When I find any book related to Florida (or California), I take a moment to see what it says about Walt Disney World or Disneyland. 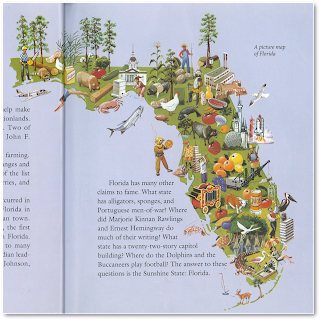 The book is from 1991 and I was pleased to see the map on the first few pages. Obviously, this is a fairly generic look at Florida, with highlights hitting the major industries, tourist spots and landmarks. As far as Walt Disney World, the editors have chosen Cinderella Castle and Spaceship Earth to represent the Vacation Kingdom. 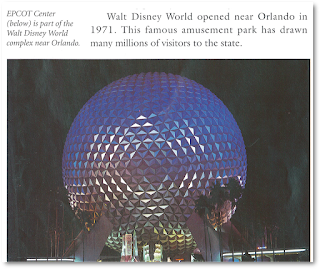 And this is what I couldn’t believe: 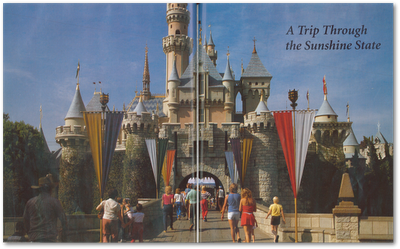 This was a two-page spread near the middle of the book and I had to look at it for a second, because this was a book about Florida, not California. So, why is a picture of Sleeping Beauty’s Castle from Disneyland in this book? After a few moments of looking at the picture, I realized that the castle is reversed!

The photo is credited to a stock photo image company, so the editors might have simply requested a Disney castle and not paid attention.

This snippet appeared later in the book:

Orlando is southeast of Gainesville. Walt Disney World is near Orlando. This huge amusement park offers rides and a movie studio. EPCOT Center is also part of Disney World. It shows what life in the future may be like. Sea World, near Orlando, exhibits sharks, dolphins, whales and manatees.

I always find it interesting to see how Walt Disney World was promoted through travel guides, maps, brochures and, now, library books.