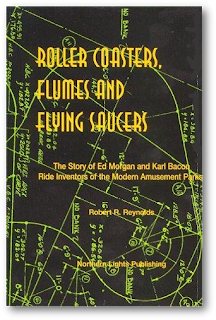 Outside of Walt Disney and his Imagineers, no one did more to revolutionize ride design than Ed Morgan and Karl Bacon. Through their company, Arrow, they were responsible for developing and building a majority of the rides at Disneyland. They would have gone down in amusement park history just for their invention of the mine car roller coaster, the log flume and the first looping coaster. Arguably, their most admired contributions consist of the following: 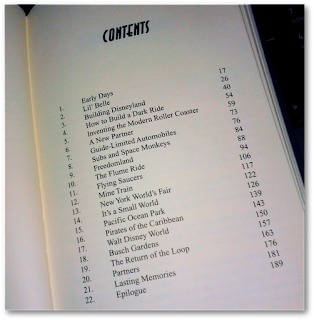 Ed relates his first coaster building experience when he was a teenager:

The summer I was sixteen, my father was out of town on a job, and my brother and I and a couple of friends needed a summer project. Someone suggested we build a roller coaster, it seemed like a good idea at the time, and our lot was ideal, in that it was very deep from the street in front to the alley in back. Demonstrating a total lack of planning, we started out with an eight foot folding step ladder. The first drop started at the top of the ladder. The track bed was of 1 x 12 inch pine with side boards nailed to it. The coaster car was a short plank supported by four roller skates modified for this purpose.

In operation, we pulled the car to the top of the ladder, climbed in, and took off. Great fun, but think of how much better it would be if it were higher and longer! The next step was to add 2 x 4 inch legged supports progressively higher up. We saw right away that they were unstable, and had to add diagonal bracing. We were learning fast, but not fast enough to sit down and plan and consider the consequences.

This stage, when finished, required an extension ladder to reach the top. it provided a fast ride–too fast at the end of the track. Our solution to this was too add track with a small hill. (Pages 17-18)

One of Ed’s friends ended up rocking the car, derailed it and ended up breaking his collar bone. Ed’s father ended the coaster episode.
Roller Coasters, Flumes and Flying Saucers was published in 1999, long before the recent influx of memoirs and interview-style books. Reynolds spent a lot of time interviewing people through email and talking with Ed and Karl. he presents a majority of the book in interview form with Ed and Karl directly relating their stories. Reynolds sprinkles in historical details and outlines the full story of Arrow Development between the interviews.
Beyond the work that Arrow did for other amusement parks, you still come to sense that Disneyland would not have been completed on time or with as many attractions without Arrow. Also, the major development of ride design allowed Disney to offer attractions that no one else could compete with.Ed and Karl relate their stories of working directly with Walt Disney, Admiral Joe Fowler and Dick Nunis. At points, they discuss some fairly technical engineering feats, but it is never overwhelming. Arrow was at the forefront of developing almost every new technology for rides. The water propulsion for most boat rides, the guided rail of the Autopias, the Matterhorn and so many more. Imagine seeing the full build-out of the Pirates of the Caribbean ride in the Arrow parking lot? And Disney executives in their suits riding the attraction for the first time. Fans of the famed Flying Saucers attraction will love hearing about the development of the ride and the issues that Arrow had with keeping it operating.Most of the book focuses on Dineyland and the evolution of Arrow. There is one chapter devoted to Walt Disney World and the work that Arrow did. Arrow was hired to build almost every attraction at the Magic Kingdom, especially the Fantasyland rides. They built both of the omnimover attractions and Peter Pan (although they didn’t build Peter Pan at Disneyland).

They were asked to design Space Mountain, in 1966, and it was a far different layout than the one that debuted at the Magic Kingdom. “In the original plan there would have been four separate coasters within the structure, The tracks would also penetrate the building and continue outside the mountain for a portion of the ride.” Ultimately, Disney wanted Arrow to move their facilities to Walt Disney World but Arrow declined. Disney had enough in-house talent after the opening of Walt Disney World, that they no longer needed Arrow for manufacturing. This signaled the end of a more than 20 year relationship.

Ed and Karl relate other stories of their developments for Knott’s, the infamous Freedomland and various Six Flags parks. You realize that Arrow did a lot more than build and design for Disney, but they always saved the best for Walt. Chances are, if you have visited any amusement park in America (or most of the world), you have ridden a ride created or designed by Arrow.

I have read a few other reviews in which the book has been critiqued for the grammar and writing style. Most of the issues I had with the grammar were related to the transcriptions of the interviews. The interviews are related as is, with minimal changes in structure. The anecdotes are still priceless and perfect for the Disneyland fan.

You will gain a new perspective for the development of the theme park and most modern ride systems. Ed and Karl happened to be in the right place at the right time, but they also had the skills and talents to succeed. As I read the book, Ed and Karl reminded me of Walt and Roy in their relationships. They really needed each other to succeed. Roller Coasters, Flumes and Flying Saucers is a perfect book for anyone interested in theme park history and early Disneyland development.