On Episode 103 of WEDWay Radio, Nate and Matt discuss the Year in Review for 1983 (brilliant idea, guys). One of the releases for 1983 is the featurette, Mickey’s Christmas Carol. Matt mentions that he believed that the animated film was based on a recording released earlier. 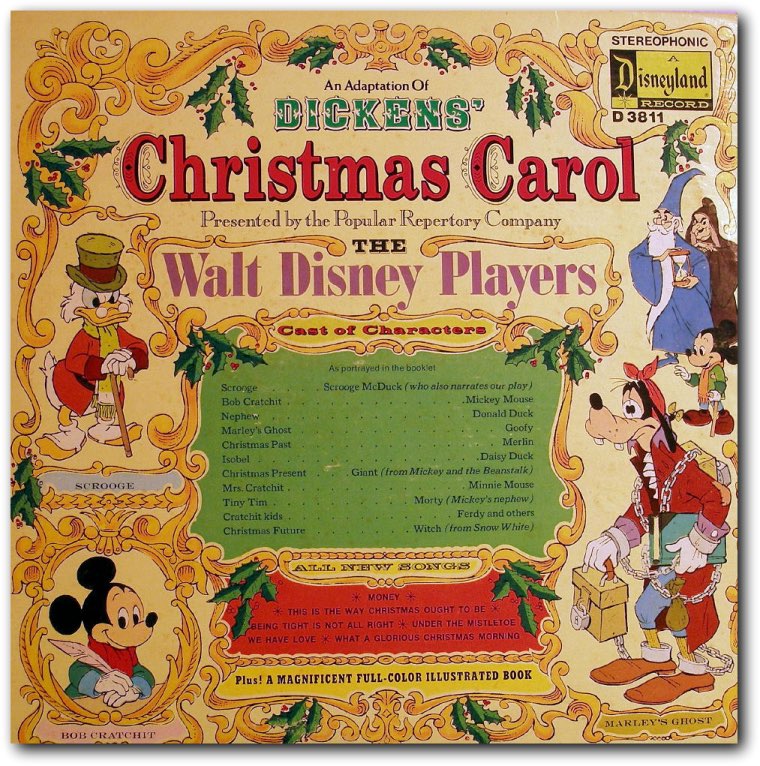 I knew I had read something in the wonderful book Mouse Tracks: The Story of Walt Disney Records by Tim Hollis and Greg Ehrbar.

[Alan] Young gained another fan base after becoming the voice of Uncle Scrooge starting with the 1975 Disneyland Storyteller album Dickens’ Christmas Carol Featuring the Walt Disney Players. But even though he wrote, coproduced, and did the voices of Uncle Scrooge, Mickey Mouse, and Merlin on the LP, Young almost missed out on being cast for the 1983 film version, Mickey’s Christmas Carol. “l was working with an actor who was doing a Scottish accent,” remembered Young, “He gave me the script, and lo and behold, it was the one I had written for the album! So I called someone at Disney and said, ‘Can I audition for Scrooge McDuck?’ They said, ‘Yes, but we didn’t think you would want to do it.”  [p. 142]

Titled Dickens’ Christmas Carol with the Walt Disney Players, the 1975 album boasted the largest assemblage of major Disney characters gathered for a recording. Mickey “played” Bob Cratchit, Uncle ScroogeMcDuck “portrayed” Ebenezer Scrooge, and Alan Young provided both of their voices as well as that of Merlin from The Sword in the Stone (as the Ghost of Christmas Past]. Young also wrote the entire script, although he shared the writing credit with Dinehart on the strength of an additional quip in which Willie the Giant (the Ghost of Christmas Present) says to Scrooge, “We have along way to travel and we must fly. Take hold of my robe—Duh, not back there, unless you want to fly tourist!”

This album provided Disney with more than impressive sales: it inspired the Oscar-nominated 1983 featurette Mickey’s Christmas Carol and led to Young’s permanent status as the voice of Uncle Scrooge on the series Ducktales and other TV and theatrical cartoons, recordings, and theme park shows. [pp. 143-144]

When I talk about books and reading, I am always reminded of a great quote by Will Rogers:

“A man only learns in two ways, one by reading and the other by association with smarter people.”

Do you remember Mickey’s Christmas Carol from 1975?