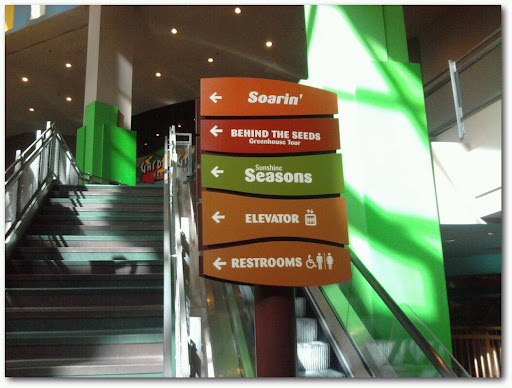 During Episode 100 of WEDWay Radio, we were discussing some of the changes to Future World. One was the removal of the castmember from the boats on the Living with the Land attraction sometime in 2009. During a 2010 visit with my son, we took the Behind the Seeds tour and noticed a stupid guest behavior that I mentioned on the podcast.

It was a great tour, especially if you have an interest in botany, agriculture or seeing the Living with the Land exhibits really close up. It can be fairly warm in the tropics greenhouse and the only cool air is near the vents along the wall.

During the aquacell portion of the tour, you get to feed the fishes and get an up-close view of the sea life and their habitats.

Obviously, an unfortunate consequence of removing the tour guides is that the guests are left to their own devices.

I discuss the following event in the last half of the episode. 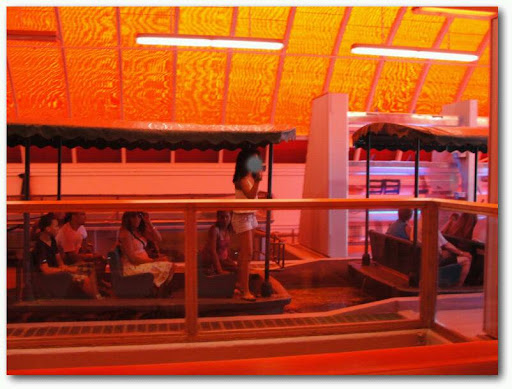 So, this guest took it upon herself to get a good photograph of the baby alligators (or were they crocodiles?) by putting herself in a modicum of danger. She was holding onto the pole supporting the canopy with her left hand while she stretched out her right hand to get a picture. It is hard to see in this photo, but her left leg is on the edge of the boat while her right leg is extended out for balance. Her hand holding the camera was over the edge of the enclosed area. I asked the tour guide what would happen if the camera had been dropped in the enclosure. She said they would have to call in a specialist to get it out. And that they would not be happy.

If you haven’t had the opportunity, make sure you give Episode 100 a listen. I guarantee you will enjoy yourself. Michael Crawford from Progress City, USA joined me as special guests of Matt and Nate for their longest episode ever! (I am still trying to convince Nate to release the hour of audio he had to cut from the show!)

One thought on “Stupid Guest Trick from WEDWay Radio”