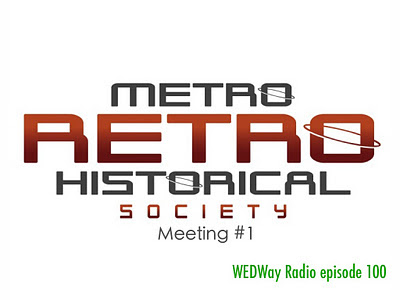 Congratulations are in order for Matt and Nate from WEDWay Radio. Not only have they released their 100th episode, but they invited me to be part of this very special show. (Seriously, it took them three years?) Oh, and Michael Crawford from Progress City, USA was there, too. it is also the debut of the Metro Retro Historical Society, which promises to be an evolving group of guests which are brought into discuss slightly geekier topics (and the WEDWay boys are already plenty geeky).

The episode clocks in at just under two hours as we discuss Future World–what was the original intent and how it has changed over the years. It is the longest WEDWay Radio Episode so far.

There are some special surprises, as well:

Not only will you learn about Future World than you ever imagined, but you will laugh uncontrollably.
Head on over to WEDWay and grab the episode now! I bet if you ask Matt and Nate nicely enough, they will send you an autographed copy of the podcast.
Don’t forget to stop by our site and leave some Disney Geek love!

One thought on “Imaginerding on WEDWay Radio!”