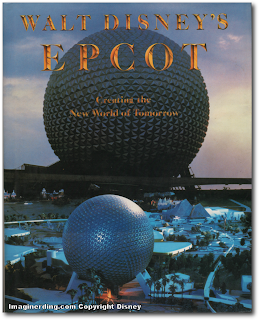 Walt Disney’s EPCOT (also known at Walt Disney’s EPCOT Center) is a title that every theme park fan should own. It is a trove of photographs, anecdotes and attraction descriptions that you will not find anywhere else. It is also a hopeful time capsule of the EPCOT Center that existed during the early 1980s. At 239 pages it is also one of the most comprehensive books about a Disney theme park that has ever been produced (Disneyland Paris: From Sketch to Reality comes pretty close).
What makes this book amazing is the amount of concept artwork and models that are presented. It was a rare time at Disney when they weren’t sure how to promote their latest offering. With EPCOT Center being a new type of themed entertainment but not exactly what Walt promised, corporate Disney wasn’t sure how to explain this City of Tomorrow that was more like a World’s Fair. So they opened the doors at WED and let us all go behind-the-scenes. It is something that Disney doesn’t do any longer. 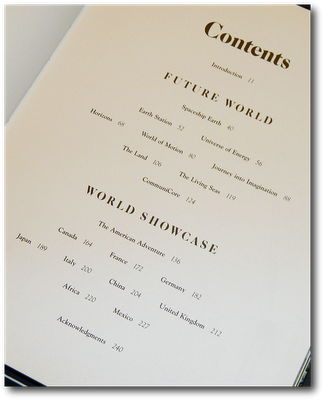 The book unfolds just like a visit to the theme park. The first section of the book is a 20-page introduction written by Marty Sklar that introduces the concept of EPCOT Center and how Walt’s ideas evolved. After that, we are introduced to EPCOT Center as any visitor would experience it, pavilion by pavilion. 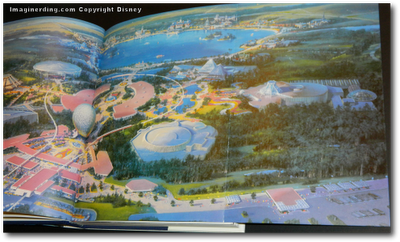 As you can see from the images, this book is a treasure. The concept art, photographs of models and pictures are one reason that every fan of Epcot should own this. The other reason is the text. Richard Beard takes us through the concept and development of each pavilion. He also, when applicable, takes us on a ride-through and tour of the area. Since there is not one Future World pavilion that has remained untouched, this is one of the few opportunities to experience the first version of the ride. 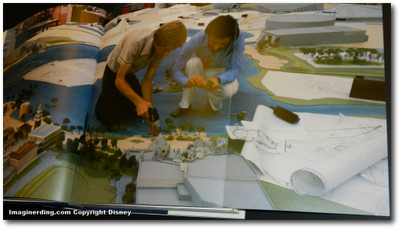 Although my list of favorite and important Disney books is getting fairly crowded, this one is always in the top five. It is a constant go to book when I want to look back at EPCOT Center or lose myself in some amazing concept artwork and models.
As of this writing, there are four different versions of the book. There are two large ones (239 pp.) and two small ones (127 pp.). The biggest difference between the larger books is when they were produced, either pre- or post-opening. The first difference is obvious: one is titled Walt Disney’s EPCOT Center and the other is Walt Disney’s EPCOT. The other differences are minor but offer the most compelling reason to collect both version–the different pictures in each book. There aren’t many photos that are disparate, and they are usually the difference between a pre-opening model of the pavilion and a post-opening shot. Either version is wonderful and will provide hours (if not days) of happy reading.
The book also does what Disney no longer does and that is providing concept art for attractions that are in the early planning stages. This is the go-to book for Meet the World, the Rhine River ride and the Africa Pavilion. It is almost like Disney learned their lesson and they only release artwork that is fairly far in the approval stages.