One of my passions is discovering long-forgotten Walt Disney World. Her older sister, Disneyland, is fairly well-documented and you will often find sites devoted to when the last time a certain patch of grass was mowed. As many of you know, plumbing the depths of Walt Disney World history can be fraught with misinformation and no information at times. Especially disconcerting is the stance that the Company takes regarding the Walt Disney World Resort and its past 40 years, Could it be that they don’t want anyone to think of the resort as being old? Who is to say, really.

One of my favorite past times is to find little corners of the Magic Kingdom that have remained untouched over the years. Sometimes it can be a door or a pathway that hasn’t had a bean-counter stumble across it. More often than not, they are quiet little areas with little traffic.

A case in point would be from a trip to the Magic Kingdom a while back with Foxfurr from Passport to Dreams Old & New. We were doing a vintage touring plan, which consisted of visiting attractions and areas that would have been open during the 1970s. It is a fun way to spend a languid afternoon in the parks. As we were looking at the sight lines in Liberty Square and discussing the changes of Ye Olde Christmas Shoppe, we headed behind the shop to check out some other architectural features.

Lo and behold, but what did we see? 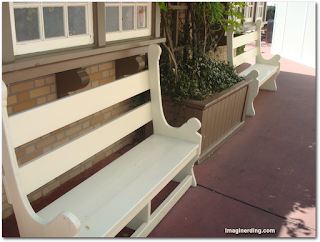 Yep, two benches sitting rather serenely on the side of the Liberty Tree Tavern (trust me, they really were serene). Foxfurr was a little surprised to see them in that spot. She was able to confirm from a video tape that they were official benches that were there when the park opened. She claimed that they have been moved around somewhat. 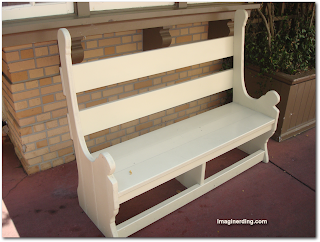 It is rather amazing to see something that has lasted in the park for that long without having characters added to it or being re-themed as Stitch’s Bench Party. Do yourself a favor and see if you can find the benches. Take a picture of yourself enjoying the benches and post it on the Imaginerding Facebook page.