Skip to content
The WEDWay Radio Boys (Matt and Nate for the uninitiated) produce one of the very best weekly podcasts about Disney. Unlike most podcasts, Matt and Nate cover every aspect of the Disney Company, including: travel; animation; theme park history; imagineers; films and so much more. They look at everything. This week’s episode is a look at Zorro and its influence on the Company and the theme parks.
I posted this review on November 2, 2009. It is still a fantastic set and worth grabbing on DVD. 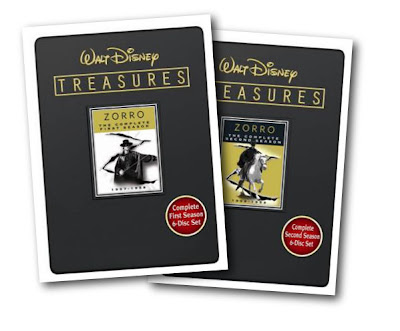 Out of the night,
When the full moon is bright,
Comes the horseman known as Zorro.
This bold renegade
Carves a “Z” with his blade,
A “Z” that stands for Zorro.
WOW! This is the perfect DVD set to introduce or re-acquaint yourself with Zorro. Growing up in the 1970’s, I saw a few reruns of the 1957-1959 series and I knew about Zorro from various films and pop culture references. I never had the opportunity to see them as presented on television, so I wasn’t as familiar with the Disney series. When I popped in the first disc of my review copy of season one, I was hooked from the get go.
This is the first time that the entire two-season collection has been offered in its original black and white airing; previous releases were Disney Movie Club exclusives that had been colorized. I was surprised at the intelligence, warmth, humor and excitement in this 50-year old television series. You are immediately drawn into the characters and the plot lines.
Leonard Maltin introduces the set (as in all of the other Walt Disney Treasures) and he waxes poetically about the series. What caught my attention was when Maltin mentions that Zorro was a precursor to the Lone Ranger and Batman. As I watched the series unfold, I noticed the similarities: Don Diego de la Vega (Zorro) was a wealthy nobleman; he had a secret cave located under his hacienda; he had a faithful manservant that assisted his work; and he was a masked man that stood for justice. Bob Kane has said that Zorro was an early influence during the creation of Batman.
The series’ writing was very comical. Don Diego’s man-servant, Bernardo, was an immediate favorite. Bernado portrays himself as a deaf-mute in order to help spy for Zorro. The hapless Sergeant Garcia became as sympathetic as he was inept; it was obvious that his heart was in the right place. The following clip is a song sung by Sergeant Garcia and is a perfect example of the interaction between Don Diego, Garcia and the ancillary characters.

This set is great family fun and will provide many hours of entertainment. I can’t tell you how many sword fights that I have had with my sons since we started watching Zorro. Of course, we were using foam swords

and I always played the evil Comandante!
This set will make a fantastic Holiday present for the Disney enthusiast in your family.