Skip to content
Avengers Assemble!
Season Two of this fantastic series is available on DVD. 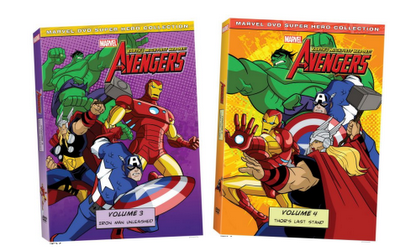 We are huge superhero fans at Imaginerding HQ. With the rebirth, so to speak, of the Marvel Universe with the Iron Man film, we have seen every film and collected the DVDs.
I reviewed Volumes One and Two, here.

Much like the first season, we found the stories to be engaging, exciting and educational. Yes, I said educational. We were able to use the DVDs as a starting point to talk about Norse Mythology and how we have run into these same gods, goddesses and stories in other media. I was surprised that my twelve year-old was as captivated by the stories as my eight year-old. Whenever the story talked about Yggdrasil or the nine realms, we were reminded of the amazing book series by Michael Scott, the Secrets of the Immortal Nicholas Flamel.

The second season brings Loki’s plan to fruition that began in the first season. You can still enjoy Volumes Three and Four without watching the previous two, but I would urge you to watch the whole series for the stories and the arc. Both seasons are a great interim while waiting for the release of the Avengers movie in 2012. They add a lot of depth to the existing film franchise and fans of Iron Man, Captain America and Thor will revel in the back stories and character development.

The voice acting was very well done and the animation was a notch above most superhero animated series that we have seen. These two volumes represent the story arc of the second season of the Disney XD series.

Although the final episode ties up the Loki story nicely, there is a surprise cliff hanger that leaves us waiting for Season Three.