Jennifer and Lisa from Those Darn Cats invited me to take part in their book club discussion of Charles Rigway’s Spinning Disney’s World. How can anyone say no to a pair of well read cats?

You can grab the podcast at their site.

Andrew and I were fortunate enough to meet Charles Ridgway at a book signing in 2007. Andrew wrote a piece about the book that dovetails nicely with the discussion, even four years later.

Enjoy, and let Jennifer and Lisa know how awesome they are by leaving a comment on their site.

As I have grown older, I have noticed more and more that one word drives how I feel about the events and occurrences of my life. That word is context. Often I find myself unsure about the meaning of things until I put them in their proper context. The context of an event gives us perspective on how important that event is to us. See, that’s the thing, importance is relative so the context is everything. 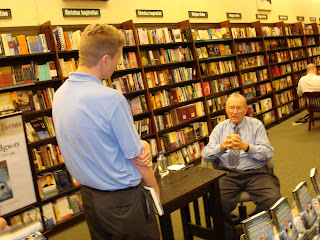 I have struggled recently with my feelings about the time I got to spend with Disney Legend, Charles Ridgway. Not because I felt anything but pure joy when I was reading his book and listening to him speak, but because I could not place the whole thing in the proper context.

For example, I was recently talking to my brother George (the other Disney Geek) and I was explaining the difference between the two Disney books I have recently consumed. Ridgway’s book was pure fun and enjoyment. I loved every minute of it and read it in a few days. I am also reading The Disney War by James B Stewart. Honestly, I am loving both tomes but they are each special in their own way. In struggling to explain to him why I liked each book but felt that Disney War was more compelling, I proposed this theory:

Maybe because Ridgway is a press agent writing a book and Stewart is an author writing a book, the Stewart book feels more compelling. Even though I love both books, I just can’t put my finger on it.

There it is….I just can’t put my finger on it…a cry for help to my lingual hero and savior: context.

A Disney Geek friend, Matt, was explaining to me 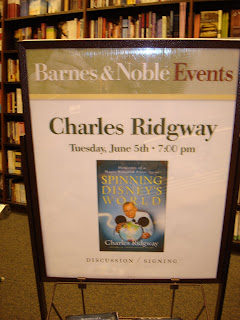 that he liked the book as well but that he wished it went a little deeper. I understand what he meant and again relayed it back to the theory of the author or the journalist. Still, Matt wanted a little dirt in the stories and Charlie never strayed from his tone of adoration for Disney. I would not classify it as a deficiency from Charlie, because as I have said a million times already, I LIKES THE BOOK!

I just can’t put my finger on it….


Then in a conversation about our recent time with Charlie, George delivered the context that explained why I felt the way I did. The book is not meant to be a scathing expose ala Barbarians at the Gate or a historic accounting with massive significance (think the 9/11 Commssion Report/Warren Commission Report). After a long career at Disney where he knew not only the man that started it all, but also the magic the permeates all the Disney-ites–this was Charlie’s love letter to Disney. It’s a look into the soul of Disney and those who made it what it is today. All of us have dreamed about being on the inside of the Disney family, especially during the Golden Years, and Charlie allows us to vicariously do what he did. We imagine ourselves talking with the original Imagineers at WED, walking the grounds of an unfinished Magic Kingdom, having an office in City Hall and being there on OPENING DAY!

That’s it! I was enjoying the guilty pleasure of reading someone’s long kiss goodnight and it was obvious–he loved the company he spent his life working for as much as I do. I could easily identify with him because we shared a passion. In sharing his passion with me, I was able to experience things through his eyes that I knew I could never experience. In the end he really helped define the soul of the company I recognize today.

I asked him if there was a moment or event in his time at Disney where he knew it was going to be Disney for the rest of his life. His reply underplayed any specific moment or event. At first I was disappointed, but after digesting it I realized that I had the advantage of seeing all of these amazing events in one long love letter. He lived them in between coffee breaks and paychecks. I don’t know about you, but on coffee breaks at my work I have never lunched with Bob Hope or looked at sketches for a new attraction. Lucky us? Lucky him. 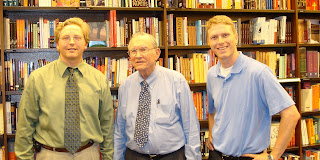 My dad put it well at dinner the other night. I was sharing my excitement with him and he commented, “You were talking to a piece of living history.” Mmmm, more delicious context. Why was all of this important to me? Because everything I read, heard and saw, I absorbed. I was recording history for those it mattered to. See, general history is catalogued by the historians, the details are recorded by the geeks. There are geeks everywhere: bodies painted at sporting events; black t-shirts at rock concerts; or with ten collectible cars in the garage. We come in all shapes and sizes and regardless of our geekness of choice, the details are counting on us.

One thought on “Spinning Disney’s World, A Discussion”