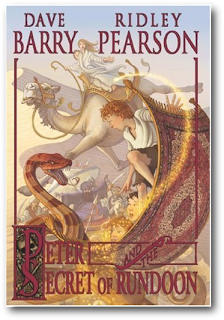 Peter and the Secret of Rundoon (The Starcatchers)

The third book in the Starcatchers series continues the fantastic storytelling, character development and excitement of the previous entries.

The unique talents of Barry and Pearson blend to re-imagine the origins and backstory of Peter Pan, adding new characters that interact seamlessly with our heroes. Harking to my review of Peter and the Shadow Thieves, there is not much I can tell you about Rundoon that won’t spoil the first two books. I enjoyed this book as much as the other two, especially seeing the layers that the authors create that tie into the Peter Pan folklore.

In most books where a teen is the central hero, many of the decisions made lead the character to success, regardless of the inherent dangers. Even the choices that counter their parent’s (or other adult’s) wisdom and better judgment. Like Harry Potter and Percy Jackson, Molly, with George Darling, wants to chart her own fate and decide the best course of action. This is something that bothers me about most tween and teen literature, yet I can see the appeal for a teen who is still trying to find himself. It is an opportunity to express themselves through the actions of a character.

Learning more about Peter’s lineage and connection to the Starcatchers was a welcome surprise. He is still a pertinent character, but his strengths are not central to getting out of every jam. Peter has to rely on his friends and they work together to try and defeat and foil the plans of the Others. The authors are careful to put Peter in situations where he can’t just fly away. In Rundoon, Peter starts to notice that his friends are taller and bigger than he is. It is an interesting juxtaposition for the character since we know him as the Boy Who Never Grew Up and he is realizing his strengths and weaknesses.

A very unique alliance is struck between the characters in the final act of the book–one that might be surprising. More is revealed pertaining to what we know about Peter Pan, Hook and Tinkerbell. Barry and Pearson weave the character development throughout the page-turning read without distraction.

Like the other Starcatchers books, Rundoon has some fairly dark moments and some fairly despicable characters. The villains (there are more than just Captain Hook and Lord Ombra) display a plausibility that renders them more real than most tween literature villains. This book is aimed at young adults who are looking for mystery, intrigue and suspense. Invest some time with this series and you will not be disappointed.