I believe that I have stumbled upon one of the pivotal moments in the design of the Haunted Mansion! 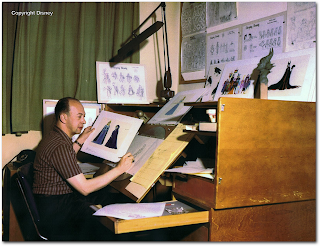 Another gag Stan (Green) and Bud (Hester) used to do was they said they knew that Marc Davis had his desk situated in such a way that from the corner of his eye he could see the hallway through his door. So if anybody walked past his office he would catch a glimpse and look up. As you know, Disney animation hallways in the building were linoleum. You heard leather shoes walking down the hallway pretty loudly. So what Bud and Stan would do would be, Bud would clomp, clomp with his feet and walk right up to the edge of Marc’s door and then stop. And then Stan would resume from the other side of the door clomping away. So all Marc would hear was the sound of someone walking but then he would never see anything. And this was just distractive enough to make him look up and like, “What the hell is going on out there?” (Walt’s People Volume 9, p. 497)

The Walt’s People series by Didier Ghez is a must have for every Disney enthusiast. Consisting of interviews recorded and transcribed over the past 30 years with some of the biggest names in Imagineering and animation, the books are filled with countless stories and hidden gems. In Volume 9, Didier interviews Tom Sito, an animator, story artist and Disney historian. The quote from Tom, above, shares a gag that was played on Marc Davis, one of Disney’s Nine Old Men by Bud Hester and Stan Green. Bud and Stan were key assistants and worked directly with the animators.

2 thoughts on “Walt’s People: Marc Davis and the Origins of the Haunted Mansion”