I posted this review in 2008 and it has always remained a favorite book about Walt Disney World. There has not been as much published about the history of Walt Disney World, as compared to Disneyland, so we are forced to glean a lot of material from primary and secondary sources. If you are looking for more books that detail the history of the Vacation Kingdom of the World, then check out my bibliography of titles on Walt Disney World. I added a few more photos of the book at the end of the post. Enjoy! 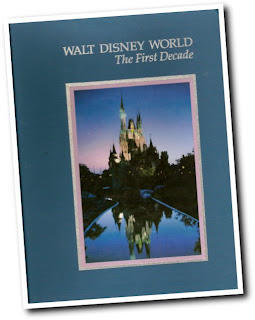 Looking for a fairly inexpensive and photo-filled look at the first 10 years of Walt Disney World?

This book is for you!

A cross between an annual guide, PR piece and corporate history, this is a fascinating look at the first ten years (well, it does cover the construction–closer to the first 15 years) of the Walt Disney World project. As per most titles on the subject, there is general coverage of the Company, Disneyland and the early progress on Walt Disney World. After the introduction, the book takes off on a leisurely, but extensive, look at everything during the first ten years.

The book focuses heavily on the Magic Kingdom and looks at each land in detail–with descriptions and lots of pictures. In-ride photos, photo-ops with celebrities from the 1970’s and views of the park make up a majority of the pictures. Trust me, you will open this book many times just to take a virtual trip back to a Magic Kingdom that is no more.

Remember the Greenhouse on Center Street? 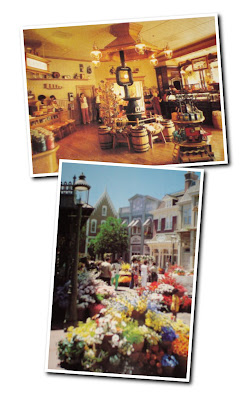 The Contemporary and Polynesian Resorts each get about five pages apiece in their coverage; lots of views of the lobbies and guest recreation areas. It is one of the few places to get basic info about the Golf Resort, the Lake Buena Vista Resort Community, the Village Marketplace and it is also one of the few places where you can visit River Country one last time. Fort Wilderness and the Tri-Circle-D Ranch are covered in wonderful detail. The photographs and details available in this book about the Walt Disney World resort are simply astounding. 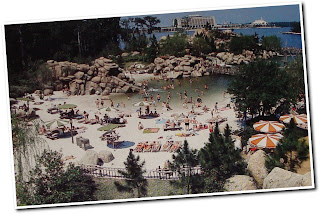 What is really going to excite the Disney Geek is the behind the scenes information that Disney was so keen to publish before Epcot. Especially when they were trying to show off the new technologies that were promised as a result of the Reedy Creek Improvement District. The state of the art reservation center, the Central Energy Plant, the water reclamation center and the environmental planning (canals, ecology and conservation) are all given coverage. 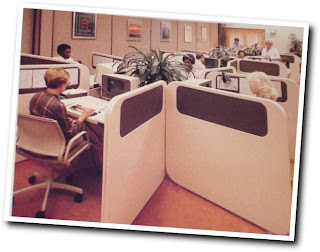 The very last section is a short look at Epcot. Can you spot the missing Pavilion in the picture? 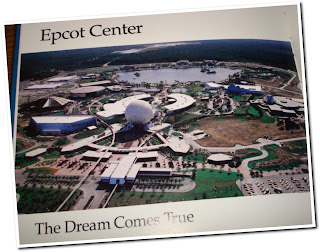