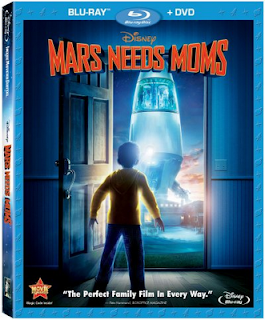 This film was routinely slammed by critics during its initial release. Due to the reviews, we decided to pass on the film in the theaters and wait for the home theater experience. When our review copy came in, I wasn’t sure if I wanted to sit down and watch it. My youngest was pretty excited about it, so we all sat down to watch it.

Surprisingly, it was a fairly charming film about families, love and respecting each other. The film was produced by Robert Zemeckis, who also did Disney’s A Christmas Carol (read my review, here). Both films are computer animated but were originally filmed using full motion capture technology. Zemeckis has always championed this as the future of animation, since any actor can portray a part and a digital image can be placed over the actor. Due to the lackluster response, it looks like this technique might not continue. There is a marked improvement between the two films, as far as the animation is concerned. The characters in Mars Needs Moms were not as lifeless as previous Mo-Cap films.

It is obvious that the film is geared towards a younger audience. The plot and characters are fairly oversimplified and the message is heavy-handed. Kids will enjoy the suspense and humor while parents will enjoy some quality time with their kids. It is also a film that you won’t mind watching repeatedly.

This Fall, families will not want to miss the chance to own MARS NEEDS MOMS, the story of a young boy‘s intergalactic adventure to find his Martian-nabbed mother as it arrives into living rooms across the country in a Blu-ray™ Combo Pack with 3D, DVD, Movie Download and On-Demand August 9, 2011. From Disney and Academy Award®-winner Robert Zemeckis (Best Director, Forrest Gump, 1994), comes the craziest adventure in the galaxy— complete with out-of this world special effects and jam packed with bonus features, it‘s a thrilling journey that‘s pure fun.

Film Synopsis:
Take out the trash, eat your broccoli — who needs moms anyway? Nine-year-old Milo (Seth Green) finds out how much he needs his mom (Joan Cusack) when she’s nabbed by Martians who plan to steal her mom-ness for their own young. In a race against time and oxygen, his quest to save her knows no bounds. And with some unexpected help, Milo just might find his way back to her — in more ways than one.