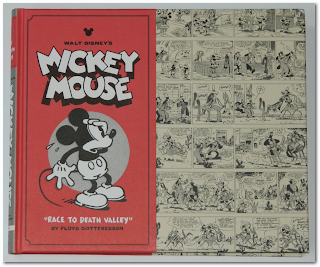 Every once in a while, a book comes along that is simply spectacular. This collection of comic strips by Floyd Gottfredson is a perfect example of how to present, analyze and reconstruct subject matter that is viewed differently today. The series editors (David Gerstein and Gary Groth) pull no punches in discussing why Mickey was carrying a gun or the use of slang that is noticeably offensive by today’s standards. This is a wonderful vehicle for presenting historically accurate art. Other companies should take notice.

Mickey Mouse is a global icon.

It is really hard to imagine a time when the Mouse didn’t pervade every media outlet. When these comics were produced, it was Mickey’s first foray into the lucrative comic pages of the day. The editors recount the story of how the strip came to life through research vignettes that are carefully peppered between the serials. The first three months worth of strips were written by Walt Disney and drawn by Ub Iwerks. Win Smith handled it for a few weeks before Gottfredson was brought in on a temporary basis. Gottfredson ended up at the helm of the strip for the next 45 years.

There are fourteen serials presented in the book covering January 13, 1930 to January 9, 1932. The editors went to extreme lengths to secure the strips. Often, they had to borrow panels from collectors when Disney’s masters had been damaged. The strips have been reproduced in a brilliant fidelity; the artwork and lettering stands fresh. Some of the antics may seem silly or overtly simple, but you have to remember the restrictions that a four-panel comic presents. The first panel needed to “catch up” the reader while the last panel needed to offer a reason to read it the next day. Gottfredson quickly became the master of the medium.

The supplemental material provided by the editors would shine on its own. Historical context is provided that explains the quirks of the characters as seen through modern eyes. Yes, there are times when Mickey carries a weapon or when certain ethnicities might be overly generalized, but you have to appreciate the comics as they were presented.

The last 60 pages of the book are dedicated to essays and archival features. Included are the first three months of the strip before Gottfredson took over. The editors offer essays about the artists that assisted Gottfredson and how the characters existed inside the world of the comics.

This is a stunning work. The historical presentation is flawless, as is the artwork. We meet a Mickey Mouse that very few of us experienced. When Gottfredson was penning the stories, he wasn’t bound to the same code that the animators found themselves having to adhere to. As Mickey evolved on screen to become the charming every-man, the comics offered a Mickey that was more aligned with the earliest shorts. He was more of a good-natured rascal who was always looking for the best in people and in situations.

This is a must-have for Mickey fans, comic fans and anyone else with an interest in the early years of the Disney Company. You will garner a greater appreciation for Mouse and how he developed across different media. You will also get to see Horace Horsecollar, Clarabelle Cow, Kat Nipp and Butch in more of a starring role. Pick up a copy; you won’t be sorry.