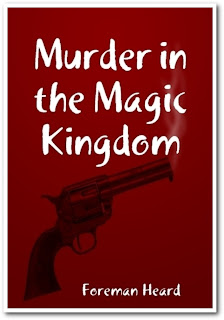 I received a copy of the book in the mail in April of 2009. I don’t remember an author’s solicitation, but I am assuming that he sent it to me. Based on the blurb on the back, the title sounded intriguing, but I always had something else that showed up on my To Read shelf, first. After reading the Kingdom Keepers series, I decided to give the book a try. The track record for fiction based in a Disney theme park is not very good. My biggest complaint about the Kingdom Keepers and Dream Factory is that the authors sacrifice the geography and the “facts” about the parks to better integrate their stories.

Here is the blurb from the back cover:

Security guard Mark Adams on early morning rounds discovers a body floating in the moat of the castle at the “Happiest Theme Park On Earth.” The police believe it is an accident, but Mark follows the suspicious behavior several company employees, and discovers a connection to a major crime figure. His investigation provides him with information that could change his life forever.

The tale unfolds and we are taken on a page-turning journey. A drug lord that has managed to infiltrate the Walt Disney World warehouse system and we see how the characters are forced into decisions that don’t sit well with them, but there seem to be few options. Several castmembers are pulled into the situation, which leads to the murder. Foreman does a good job with the pacing and the dialog. The characters never seem stiff and it is easy to keep up with conversations based on tone and style.

Throughout the book, Foreman alludes to another part of Walt Disney World that harbors a larger mystery. Fruition occurs at the end of the book. I’m sure you’ve heard the rumor about Walt Disney being frozen, right? Well, a little bit of fantasy never hurt anyone. In this case, you have a satisfying read that will keep you second-guessing the characters and turning the page to see what happens next.

I enjoyed the book and I think most fans of Walt Disney World from the late 1980s will get a kick out of the references. It is a quick read and will make a great companion at your favorite beach. I urge you to take a chance! Foreman hasn’t written the Great American Novel, but he spent some time doing something that he loves and it shows.


A Little About the Author:
Foreman first visited WDW the day after Thanksgiving 1971, the first day the park was closed because of capacity.

Traffic was backed up on the 2 lane I-4 from just past the (now) Sea World curve all the way to the Magic Kingdom parking lot. Took about an hour. Still got into the park about 9:30. Over the years I have been to the parks hundreds of times. My wife worked for the Disney company for 34 years, so I had a spouses Main Gate Pass which gave me free access, until she was laid off in 2009. I really feel for people that have to pay to get in.

His real job is Real Estate Title Examiner for the nations largest title underwriter. As far as hobbies: Community Theatre, writing, trains and collecting photos with Disney characters (250+ so far). Foremen is married with a grown-up daughter living in North Carolina. He lives in Sanford, FL, (the Southern end of the Auto-Train) and he is currently trying to sell his 125 year-old house so he doesn’t have to cut the grass anymore. The top of his bucket list? Drive one of the WDW Steam Railroad Locomotives around the Park.

One thought on “Book Review: Murder in the Magic Kingdom by Foreman Heard”