During the nebulous 100 Years of Magic Celebration that swept the Disney Company in 2001, many different products were released to bolster sales and attendance at the theme parks. The celebration was also another 18-month event that was supposed to drive people back to the parks after the Millennium Celebration.

One of the nerdier collectibles was the set of 28 trading cards that featured an important year in the Company’s history–with a photograph on the front and several facts on the back. In order to be more inclusive, the cards featured a few non-Disney items as well. 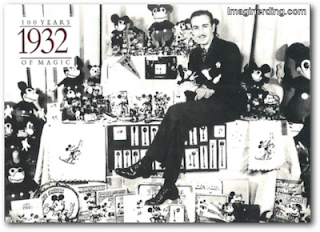 With Mickey Mouse gaining popularity worldwide, Walt and Roy Disney licensed the rights to use Mickey’s image for merchandising. On July 1, 1932, the contract was finalized. Soon after, new products appeared such as a Mickey and Minnie wind-up train and the enormously successful Mickey Mouse watch. 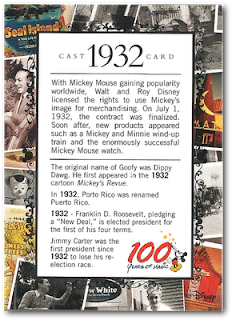 The original name of Goofy was Dippy Dawg. He first appeared in the 1932 cartoon Mickey’s Revue.

1932 – Franklin D. Roosevelt, pledging a “New Deal,” is elected president for the first of his four terms.

Jimmy Carter was the first president since 1932 to lose his re-election race.