The Raiders of Castillo del Mar by Tristan Lindsay and Shane Lindsay. Kindle Only. 2011 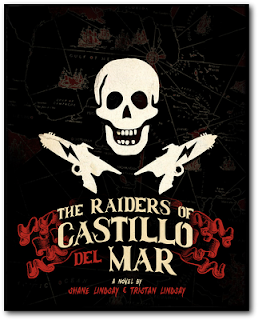 One of the objectives of Imaginerding is to foster a sense of community with Disney bloggers. Each week, we share some of the best Disney posts on the Geek-End Update in order to promote what other Disney enthusiasts are writing. It is hard to imagine a Geek-End Update that does not feature a post from Shane Lindsay from Parkeology. As the name implies, Parkeology is a site dedicated to discovering and discussing a few of the more non-traditional Disney rumors and park facts. Each post is dosed (or doused, as the case may be) with a liberal amount of well-placed humor. Tristan Lindsay runs Lindsay Brothers with Shane. At Lindsay Brothers, they focus on short fiction and other fun pursuits of the literary vein.

In May, Shane posted on Facebook that they had just released a Kindle ebook and he hoped some people would take a chance and try it out. I logged into my Amazon account and purchased a copy. It was pretty exciting to buy my first ebook and I was surprised at how quickly the book appeared on my Kindle.

The Raiders of Castillo del Mar is a fun, engaging and page-turning read. Although there is no direct Disney connection, there are plenty of subtle Disney references scattered throughout the dialog, locations and characters.  Raiders is a very absorbing story with intriguing characters. I hate to call it a beach read; it is a lot of fun and hard to put down, which usually connotes a great weekend read. Shane and Tristan are great guys and this book deserves to be seen by a wider audience, hence this review on a Disney-focused blog. The book is fun and will keep you guessing. The highest compliment that I can give the book is that you will have a good time reading it and you will not want it to end.

Raiders chronicles the stories of two, disparate groups separated by a couple hundred years and some rather mysterious circumstances. Johnny Socko, our hero, is the proto-typical 1950s teen. When we meet him, not only is he the local football hero, but we discover he is unknowingly and unwittingly involved in a love triangle and that he is a well-known adventurer. The tale alternates between the band of pirates from the 1700s and Johnny’s attempt to unravel the mystery of the pirates over 200 years later.

I was reminded of some of the semi-campy, pulp novels from the 1950s where the technology seems a little far-fetched, the characters feel single-minded and the villains are enjoyable as broad personifications. This is not a slant because the Lindsay brothers quickly move past these literary stereotypes and invest a lot of emotion into the driving forces behind the characters. As broadly painted as Johnny and his friends are, the pirate characters have a healthy does of humanity laced in their thoughts and actions. It is almost as if the pirates are based on true, historical figures and the 1950s characters are drawn a little more broadly. Anne Dubois, the red-haired pirate lass suffers an ill-fated romance with Titus, a former Captain. One of the driving factors in the book centers on their turbulent relationship. You’ll need to finish the book to find out more.

When you read a self-published book, there is the hesitation of the quality of the writing and grammar. I felt confident that I would enjoy the book from reading the Parkeology posts, but I was surprised at how well the Lindsay brothers crafted their story. It was obvious that they have a command of the written word and had additional people edit and proofread the book. I have read countless books where the author wrote in a vacuum and released the work without consultation; these cases leave you frustrated with the poor writing and misinformation. And gunshy to try other self-published works.

Raiders of Castillo del Mar is a lot of fun and offers the reader a story crafted with intrigue, a sense of humor and some hidden Disney references.

Hop on over to Amazon and download your copy. Even if you don’t have a Kindle, you can read it on your PC, iPad or Android.

Shane Lindsay and Tristan Lindsay grew up in the Midwest, where they dreamed of following in the footsteps of their favorite literary characters. Upon discovering that “Jedi” was not a real job title, they quickly switched gears and became writers.


The two brothers now reside in Orlando, FL, where they spend their time obsessing over theme parks, writing extraordinary adventure tales, and bickering over second act problems. They can also be found blogging on parkeology.com and lindsaybrothers.com, which provide healthy outlets for their procrastination.


Tristan has a girlfriend. Shane is married. Neither woman cares much about second act problems.