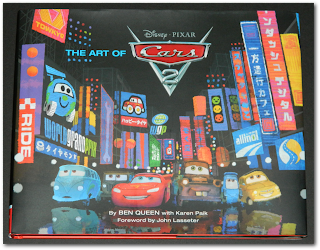 Chronicle Books has released another stunning, behind-the-scenes look at the latest Disney/Pixar film with the Art of Cars 2 (see my reviews of the Art of Toy Story 3 and the Art of Up). This review was written before the release of the film and contains no spoilers outside of the images featured in this post.

One of my first reactions to the art presented is that the film is going to be absolutely gorgeous. The book follows the format of the other titles in the “Art of Series…” with lush graphics, concept artwork, storyboards and anecdotes from the film’s creators. Granted, I have a better idea of the storyline after reading it, so you might want to wait until after you see the film before purchasing this book. Detailed and stunning backgrounds will give you pause–I can’t wait to see how they are integrated into the film.

This book goes beyond the basics and takes you deeper into the minds of the artists making the films. More than just character drawings, you learn a little bit more about their backstory and how the cars developed their own significance in in the film. It does look like Mater is going to be a major comic-relief character, but that would be expected. Anywhere Mater goes, it is a hick-out-of-water story. One section of the book details the characters, plots and locations that just didn’t make the final cut of the film. Calais Port and several locations in Germany (including Oktoberfest) were dropped or reconfigured to take place in other areas of the world. The section offers a look at how a modern animated film is composed and how ideas are often recycled.

The idea of the Cars franchise never really excited me. I enjoy the Pixar films (The Incredibles is the best one, by far) but I don’t find myself wanting to view them as much as the older, classic Disney films. I enjoyed Cars in the theater but I found myself more distracted by the fact that this was a world inhabited by cars and built by cars. I paid attention to the way that buildings were set up and tried to figure out how they were built and how the cars inhabited them. When I first heard about Cars 2, I couldn’t build up any internal momentum to see the film. As information was released and I learned about the spy aspect, I became more interested. From the book, it looks like they model the world on various automobiles. With the addition of planes, boats and other vehicles, it makes me wonder if we will see Cars 3: The Civil Unrest! Where the planes, trains, boats and cranes revolt against their evil, car overlords! 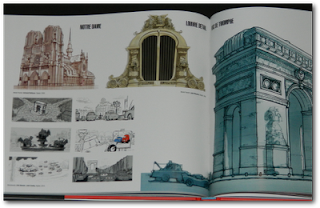 I am hoping to get more of an Incredibles experience from this film, as opposed to a Cars experience. And from the looks of the Art of Cars 2, I might just get my wish!

One thought on “Book Review: The Art of Cars 2”