June 13-17, 2001, has been named International Hollywood Studios Awareness Week by Matt Hochberg at StudiosCentral.  Matt wants to raise awareness of the Hollywood Studios by asking bloggers, podcasters and tweeters to publish something about the Studios. I originally published this essay in January of 2008 and it has a tie to the Studios, Studios Central and Star Tours. It has also not been edited since I posted it. My inner grammarian was chomping at the bit to get out his red pen.

The pictures in this post are 18 years old and you can see how the Star Tours show building looked during the first years of operation. And yes, I was wearing Chuck Taylor’s; arguably, not the best choice in footwear for a visit to a Disney park.

We don’t like to brag at Imaginerding very often (yeah, right)…but I won a free StudiosCentral.com t-shirt! Glenn (one of Hochberg’s cronies) posted the request for your earliest memories of the Disney-MGM Studios. Apparently, thousands entered, but only a few won.

Here is my award-winning post (nerded up for our site):

You can read about my first day at Walt Disney World here.

We continue our story with the Disney-MGM Studios. Specifically Star Tours. Besides the Haunted Mansion, this was the ride I was most excited about. Back in the day (1994), the Early/Extra Magic Hour was called Surprise Morning. They rotated the parks on a specific schedule and people really did not take advantage of them. Ah, those were the days. Anyway, Sunday was the Surprise Morning for the Disney-MGM Studios. 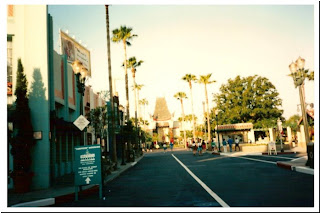 We arrived at the Studios a little after 8:00am. If I remember correctly, the park was scheduled to be open at 9:00am. For some reason, I remember the song Mr. Jones by the Counting Crows playing on the rental car that morning. But I could be wrong; it may have been another day we were there. Needless to say, that song reminds me of that time. Warmth. I remember that it was very warm in the mornings in Orlando. 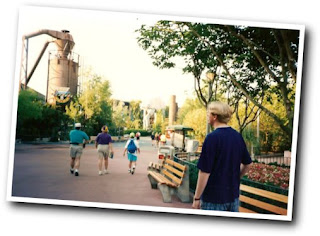 There was no one in the park that morning. To the right and above, you can see my first view of the Star Tours attraction. I vividly remember the kid and his parents walking in front of us. The kid with the baseball hat and blue backpack. And yes, I am wearing a dark blue t-shirt. It was hot (the weather–not me). We followed the kid and his family through the line and rode the attraction. What can I say? It was great. We visited Endor and in the traditional Disney storytelling fashion–something went wrong! When we left the ride the Star Wars fanfare was playing (you know, the music they play over the credits) and it was really exciting. Then we walked into the coolest thing in the world: a Star Wars gift shop! 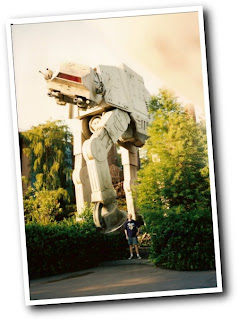 I know, you’re laughing, right? Well, you have to remember that back in 1994, there was not a lot of Star Wars merchandise. Heir to the Empire by Timothy Zahn had just been published in 1991. Before that, the last Star Wars books, merchandise or toys had been released in the middle 1980’s. Needless to say, Teresa let me gawk for a moment and then we went to the front of the building to ride it again.

And again. I think we stopped after the fourth ride to meander and shop. At least I did. This is another one of those moments that I remember. Picking out the books, toys and paraphernalia–trying to decide what to get my brothers and nephews. And what I wanted. I picked out a book for myself by Stephen Sansweet called Star Wars: From Concept to Screen to Collectible. I consider it one of the first books of my collection. When we finally had finished, we had spent over $400.00 (1994 dollars). Whew! Talk about spending too much! But it was Star Wars. 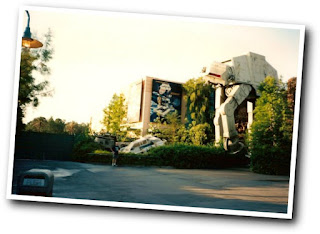 I do remember that the cast member gave us a lot of attitude about shipping the items back to our hotel room. Which was really weird. We just spent a lot of money…and we were at Disney! Actually, she was the least friendly cast member we ran across during that first trip. I believe that we ended up riding it at least one more time before Teresa told me we had to do something else. I don’t remember anything else about the day. I know we rode other things, like the Great Movie Ride and Muppet Vision 3D, but I can’t recall exactly.

Thanks to Matt and Glenn for the amazing addition to my wardrobe. I just need to get it pressed and cleaned before MagicMeets!

2 thoughts on “Studios Awareness Week: My First Trip to the Forest Moon of Endor”