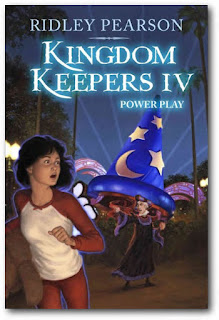 By far, the fourth installment of the Kingdom Keepers series is the most charming, captivating and exciting!

I was disappointed with the first and second title, mainly because I wasn’t able to let go of my Disney geekiness and enjoy the titles as fantasy. Pearson stepped up in the third and fourth books by integrating more of what he is known for: suspense and thrills. As I mentioned in my review of Disney In Shadow, Pearson invests more time in developing the Keepers as teens instead of stock teenage characters. In Power Play, he continues to craft well-likeable characters that are presented with the same issues as teens today–minus the need to battle Disney Villains!

Throughout the series, we have had hints about the good characters coming to the aid of the Keepers, and we see it for the first time in Power Play. By the end of Power Play, Pearson ties up a neat little package for us that will include future books about the Disney Cruise Line and Disneyland. He also manages to explain what might actually be happening behind-the-scenes of the Fantasyland expansion. What really happened to Mickey’s house?

This is a great series for pre-tees and tweens. I would assume that most teens that are not die-hard Disney fans will pass on the series. As I have started before, most adults will need to put on their rose-colored Mouse Ears to fully enjoy this series. Pearson takes liberty with Walt Disney World geography on occasion which can leave you scratching your head. For the most part, the third and fourth books are more aligned with the actual property. Although, the Keepers can make it from the Mexico Pavilion to the Wonders of Life Pavilion faster than, well, a theme park junkie hopped up on churros and free soda from Club Cool.

If you have the time, the opportunity and you are obsessed with Walt Disney World, then you will get a kick out of these books.

If you need a non-Disney recommendation for a similar title, then you should check out The Secrets of the Immortal Nicholas Flamel series by Michael Scott. It is one of the most engaging and intelligently written series out today. The first book in the series is The Alchemyst. And yes, you can thank me later.

I did receive a review copy of the book.