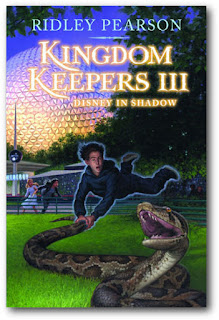 The third part of the Kingdom Keepers saga picks up a few months after the events in Disney at Dawn. Thematically, this book reminded me more of the first book, in that it takes place over several weeks instead of a brief two-day period, like Disney at Dawn.

The Keepers are trying to get back into their regular lives while developing their friendships in and out of school. The biggest issue is that Finn, the leader of the Kingdom Keepers, has not heard from Wayne since their last adventure. Unlike the other titles in the series, this book focuses on mysteries that need to be solved in Epcot and the Disney Hollywood Studios, instead of in just one park. The Kingdom Keepers spend a lot of time running from animatronic villains and visiting backstage areas of the theme parks.  The Kingdom Keepers (Finn, Maybeck, Willa, Philby and Charlene) are joined by Amanda and Jess, the Fairlies with special powers, who are given the DHI treatment by Philby.

The characters are much better developed in this installment and they are starting to differentiate themselves from the stereotypes we have seen previously. It is actually fairly charming to see Finn stumble through the love triangle that is starting between him, Amanda and Charlene. Pearson has nailed the rather clueless teenage boy stereotype and uses it as a staple of comic relief.

The storyline is getting tighter and Pearson seems to be taking less liberties with the geography of Walt Disney World. So far, this is the most enjoyable book in the series and the mystery/clue-solving aspect is taking a higher priority. Pearson is getting more confident with the universe he has created and in developing inter-weaving storylines. Now, I wonder when he is going to have some of the good animatroinic heroes start to make an appearance to help the Keepers.

I am looking forward to reading the next installment, Power Play!