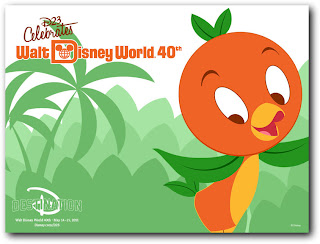 Just a few of the Imagineers, authors and librarians (yes, librarians!) that will be presenting at the D23 Walt Disney World Celebration in May.

I will be heading down to Florida in a few weeks to participate in the celebration of Walt Disney World’s 40th anniversary. This is likely to be the only official celebration (or acknowledgment) of the monumental occasion–if you have the opportunity to be there, then now is the time to get your tickets.

Get your tickets here.

Will you be there?

Let’s take a look at the schedule for Saturday

Weird Walt Disney World
10 a.m. – 11 a.m.
Following their laugh-out-loud antics at Destination D: Disneyland ’55, Walt Disney Archives director Becky Cline and Disney historian Paul F. Anderson are at it again — this time taking guests on a fun-filled trip through the strangest and most bizarre parts of Walt Disney World history. A peculiar “lawnmower tree?” A crazy cast of singing fruits and vegetables? Who knows what the duo will unearth as they explore the wonderfully weird and wacky side of the Vacation Kingdom.

Walt Disney World: The Way We Were
11 a.m. – 12:15 p.m.
Remember the charm of the Orange Bird and the musical delights of the Mickey Mouse Revue? The elegant Lake Buena Vista Shopping Village and backwoods adventures along the Fort Wilderness Railway? Join Walt Disney Archives founder Dave Smith as we explore vintage pictures of Walt Disney World theme parks and resorts, including rare photos of construction and a fond look at some favorite attractions, shops and restaurants of the past.

EPCOT: Walt Disney’s Great Big Beautiful Tomorrow
2:15 p.m. – 3:30 p.m.
Walt’s vision for an Experimental Prototype Community of Tomorrow far transcended the realm of family entertainment and for many years remained shrouded in secrecy. Re-enter the 1960s hallways of WED Enterprises with Archivist Steven Vagnini and Disney expert Paul F. Anderson in this unprecedented look at the inspirations and plans for Walt’s EPCOT, and find out the little-known ways that Imagineers brought their late founder’s dream to reality throughout the entire Walt Disney World Resort.

The Walt Disney World That Never Was
4:30 p.m. – 5:45 p.m.
What do the Western River Expedition, Asian Resort Hotel and Sleeping Beauty dark ride have in common? While these amazing experiences were crafted in the minds of skilled artists at Walt Disney Imagineering, they comprise a different kind of dimension of Walt Disney World history: the grand experiences that never made it off the drawing board or out of the model shop. With an array of rare artwork and photographs, longtime Imagineer Tony Baxter lifts the curtain and takes us on a behind-the-scenes tour through the incredible world of the Walt Disney World that never was.