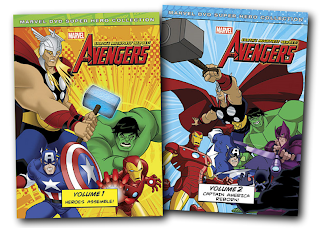 Wow. The Avengers Series produced for Disney XD is a cut above most superhero shows.

Beyond pandering to the fanboys, we get a fairly complex storyline that arcs over 13 episodes that introduces the characters, villains and their raison d’etre. Suffice it to say, any one who enjoys the superhero genre is going to love these DVDs.

My seven year-old and I are big superhero fans. Iron Man and the Hulk are his current favorites. After watching the Avengers DVD release, he has a fascination with Thor and Captain America and the idea of the Avengers.

We missed this series when it premiered on Disney XD and the notion behind the Avengers was never quite clear before watching. I read comic books sporadically when growing up because my parents never bought them for me on a regular basis. I knew that the Iron Man franchise and latest Hulk film were leading up to an Avengers film, but I never saw all of the heroes tied together. This is also a great time to introduce the animated Avengers’ series as we see the release of Thor to theaters.

I was pleasantly surprised by the quality of the stories, the voice-acting and the animation.It is obvious that the creatives behind the series have a fondness for the original tales without disregarding trends in current superhero lore.

It was a great bonding experience for me and my son. We discussed why the Avengers were forming a team and why the Hulk was so distrusting. Plus, there was the anticipation of queuing up the next episode and trying to decipher where the story might lead us next.

My only issue with the set is that Disney chose to break up the season into two separate discs instead of packaging them together. It must have been a marketing issue or a business strategy of some sort.