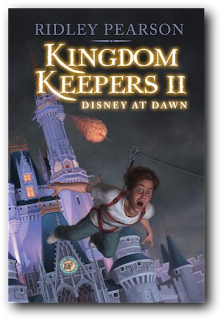 Pearson continues the epic story of five teens brought together for two reasons: to be the models for the new interactive, holographic hosts and to defeat the Overtakers.

There is not much written about Walt Disney World that follows a fantasy format and there is very little that is written that is based in fiction. The Kingdom Keepers series is aimed squarely at the tween and teen audiences, adding another niche that it fills.

In the second volume of the series, the Kingdom Keepers must rescue two of their own while deciphering the clues left behind by the enigmatic Imagineer named Wayne (who is a no-so-subtle nod to Walt Disney) and one of their new found friends, Jez. The sisters, Amanda and Jez are fairlies and add some interesting twists to the story. Jez has been captured by the Oveetakers and is being held hostage in the Animal Kingdom, leaving additional clues four our band of holographic heroes. The crux of the story is trying to discover who is running the Overtakers and what their plans are for the animals from the theme park.

John Rozum, comic book and television writer, blogger and Disney enthusiast offered his thoughts about the series after reading my review of the first Kingdom Keepers. He agreed to let me re-publish his comments.

My daughter and I have both been reading this series. Our assessment is pretty close in that they are engaging page turners, but are also frustrating in that much of each book is about trying to overcome or solve one problem that should be taken care of in a few chapters and that each book ends without any real resolution or forward progress. In a familiar comparison it would be if it took six Star Wars movies for Luke Skywalker to get around to blowing up the Death Star with entire movies dedicated to getting the characters out of the trash compactor or figuring out which cell Leia was in. Book IV was even more frustrating because the book ended with forward progression taking two steps backwards.

So, why do we keep reading them? Aside from the at the moment engaging read, it’s primarily because the stories take place in well-loved and familiar terrain, even though as you point out geography is distorted and history essentially rewritten. For my daughter there’s a real excitement of knowing exactly where the characters are and what’s around them, and knowing she had been in some of those exact locations.

It is obvious that the books are written for kids and teens that love Walt Disney World. Most people will overlook the disparities in the storytelling, but it is important to acknowledge that they exist. These are a great bunch of books to read with your kids and discuss the choices and actions of the Kingdom Keepers.

So, sit back and enjoy suspense-filled and family-friendly book about the Vacation Kingdom of the world!