Disney sent over thier latest press release for the Summer Issue of the D23 Magazine. 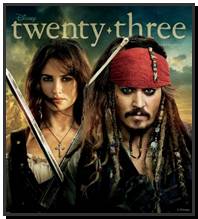 Behind the Scenes on Pirates of the Caribbean: On Stranger Tides with Scoop from Director Rob Marshall, Geoffrey Rush, Ian McShane and Richard Griffiths;
Exclusive Interview with George Lucas on Reimagining Star Tours
And a Sit Down with Stan Lee on Marvel’s Move to Disney

BURBANK, Calif. – April 20, 2011 – The summer issue of Disney twenty-three magazine hits stands May 3, filled with features that will take readers from the depths of the sea to the edges of outer space.

In the swashbuckling cover story on Pirates of the Caribbean: On Stranger Tides, director Rob Marshall and actors Geoffrey Rush, Ian McShane and Richard Griffiths take D23: The Official Disney Fan Club into the action-packed world of the highly anticipated film. The piece gives readers the inside scoop on Captain Jack Sparrow’s latest adventure with an eight-page spread of gorgeous images from the film and fascinating nuggets from the set. Readers will discover what select cast and crew have to say about Johnny Depp returning to his iconic role; learn what inspired the screenwriting team behind the earlier Pirates films as they reunited to lace together legends of the fearsome Blackbeard, the Fountain of Youth and sirens of the sea; and uncover why director Rob Marshall says of the 106 days of shooting: “You’re undergoing your own adventure as you’re filming one.”

Disney twenty-three’s summer issue also includes an exclusive interview with George Lucas, the force behind Star Wars and Indiana Jones, discussing his participation in the various park attractions inspired by his films. Readers can expect to be immersed in the creative process as Disney twenty-three reveals multiple concepts for rides that were never made. More specifically, readers will be privy to the unique brainstorm that brewed the new Star Tours ride and learn about a distinctive new twist in the experience.

In “What a MARVELous World!,” Stan Lee talks about his excitement to be working with Disney Imagineers. “It’s great for Marvel to have access to Disney’s brains, because they’re pretty smart, and it’s great for Disney to have all these characters, with their built-in audience. It’s one of the wisest things that either company could have done.” Readers will also find a comprehensive look at Stan’s history that might well serve as a Marvel 101 class. The article’s glimpse into future plans for this historic team-up shows why Disney, Marvel and fans alike are looking forward to super hero-sized results.

Just in time for summer road trips, John Lasseter introduces readers to Cars 2, in which Lightning McQueen, Mater, and a whole fleet of new characters race across the country on an international adventure. In true Pixar fashion, Cars 2 will zoom to the big screen alongside the brand new animated short Hawaiian Vacation featuring characters from the Toy Story films. This issue also celebrates Walt Disney’s own motor mania with a look back at some of Walt’s personal cars as well as a few favorites that have played special roles in Disney history.

There’s much more in the summer issue of Disney twenty-three, including: ·