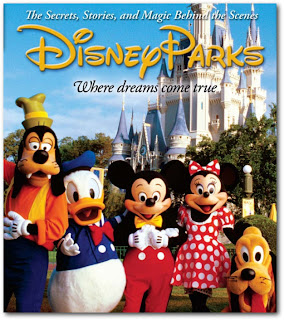 I was contacted last year to help Questar promote their DVD/Blu-ray release of Disney Parks.

The Blu-ray and DVD packs were the bestseller of 2010 for Questar.

You can read my full review here.

Questar wanted me to get the word out that all six programs are now available for download on iTunes!

First episode of the best-selling look behind the “mystery and magic” of Disney Parks is live on iTunes—more to follow!

(Chicago)—Questar Entertainment’s best-selling title for 2010, Disney Parks, has debuted on iTunes. The first program in the six-program collection—Disneyland Resort: Behind the Scenes—went live on iTunes on February 22, and subsequent programs will appear in coming weeks.

“Disney Parks has become one of Questar’s strongest-performing titles ever, and we’re excited to make it accessible to fans via iTunes,” said Kevin Silverman, Vice President, Digital Distribution and Programming at Questar Entertainment. “As the leader in special interest programming, Questar is committed to making its content available to customers on a variety of leading-edge platforms.”

Disney Parks is an official production of Disney Parks LLC, and was a smash hit on the Travel Channel before becoming a DVD and Blu-ray bestseller released by Questar. Produced by Lightship Entertainment, Disney Parks gives viewers special access to top attractions and unprecedented insight into the technology, design, and “imagineering” that goes into every aspect of the Disney experience.

The six programs that comprise Disney Parks include:

For more information about Disney Parks or Questar, contact Scott Kenemore at 312.397.2184 or [email protected]

About Questar: Questar Entertainment is one of the industry’s leading large content holders of quality Travel, Nature, and Inspirational programming for television, home entertainment, education, web and digital, with over 4,000 titles in its library. Questar has won five awards from The American Film Institute, and has been honored by Billboard Magazine and at The Covenant Awards. Questar’s “Rome: Power & Glory” was named Best Educational Documentary at The DVD Entertainment Awards, while “Bobby Darin: Mack Is Back” received a Certificate of Excellence as Best Music DVD. Questar products are distributed through Wal-Mart, Sam’s Club, Costco, Amazon, Target, Best Buy, Netflix, iTunes, Barnes & Noble, Borders, Columbia House, and Reader’s Digest. Questar has produced more than 100 original programs for PBS, The Discovery Channel, TLC, The Travel Channel, The History Channel (A&E Networks), and PAX-TV Network. Questar maintains offices in Chicago and Burbank. For more information, visit www.questarentertainment.com.

One thought on ““Disney Parks” going live on iTunes”