I originally reviewed this title in 2007. I  read it again (and started to tackle the other two books) when I received a review copy of Kingdom Keepers IV: Power Play 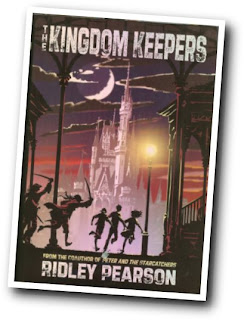 My initial reaction is the same, except I took a moment to step back and think about the fantasy that Pearson has created and how he needed to meld his story with the then-current (2007) state of Walt Disney World. There is a lot of technology used, which leads me to question how well the book will stand up over time. Also, the mythos of Walt Disney is used to portray a legendary figure that held the balance between light and dark; someone who had the prescience to lay out the magic kingdom and design attractions that wouldn’t be seen until 20 years after his passing. To me, that is the most difficult part of the novel to digest.

Ridley Pearson is a well-known and well-respected author. It is obvious that he knows how to create a contemporary, fast-paced and cliffhanger-esque novel geared towards the target audience. I just wished he would have invested more time in studying the backstory of the company and Walt Disney in order to present something a little more rooted in reality. Still, I think it is a fun read and most tweens will enjoy a story about five teens drawn together to save the Magic Kingdom from the evil Overtakers.

Kingdom Keepers by Ridley Pearson is aimed squarely at the ‘tweens who love visiting Walt Disney World with their families.

So, why I am I reading it? Well, I like books and I like Disney. It is a book about Disney…so…

I need to give my warning about this book first:

The author takes great liberties with the geographical layout of WDW and Walt’s actual involvement with the Orlando parks. If you are a grown-up Disney Geek (Jeff’s kids included), you will be dismayed with the inaccuracies and the leaps that the author takes to add suspense.

Ok, I did enjoy the book. This title rests firmly in the juvenile thriller-fantasy genre. It is sort of like a younger Da Vinci Code without all of the religious controversy. The Magic Kingdom is being taken over by the Disney villains and five young teens are tasked with saving Walt’s Kingdom and deciphering the secrets left behind by Walt, himself. Here is where I start to yell at the book while I am reading it. Apparently, Walt left behind secret codes in the attractions that will help restore the magic to the Magic Kingdom. Including rides that weren’t built until 10-20 years after he died. Uh, so how did that happen?

I do recommend the book, as long as you can detach yourself from your inner Disney Geek while reading it. It moved well, the characters were likable and the story was entertaining. It did have a pretty creepy moment where the dolls in It’s a Small World come to life. That is the real reason I don’t like that ride. It gives me the shivers!

I’m usually positive about most of my book reviews, but this one doesn’t quite satiate my Geek needs. It is still a good read and most ‘tweens will enjoy the premise and the hero aspect of the book.