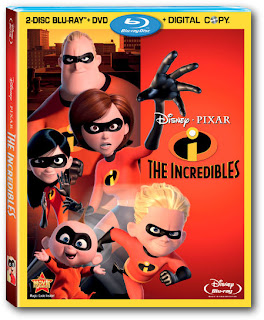 The 2004 release of The Incredibles is my favorite Pixar-animated film.I say this without a moment of hesitation, even after seeing Pixar’s more recent releases Wall-E and Ratatouille. The superhero mythos tied to the 60s-era ideal of the family unit is spellbinding and always draws me in, whether the kids pop in the DVD or it is being shown on the ABC Family channel. This is one of the first non-Studio Ghibli releases that I was truly excited to see on Blu-ray.

It is time to stand up and recite the Imaginerding Blu-ray mantra: Blu-ray and animation are a perfect match. My sentiment over Disney’s recent spate of Blu-ray releases is that you need to own the high-definition version and this film is no different. The visuals and sound are stunning and unmatched outside of the theatrical viewing experience. And yes, the film score is pretty spectacular, as well. It always reminded me of some of those wonderful 60s-era spy movies.

As Jeff Pepper at 2719 Hyperion notes, the extras are quite surprising compared to the recent release of Tangled. For The Incredibles, Disney has included a second Blu-ray to hold the majority of the bonus features.

Let’s take a look at the BONUS FEATURES:

Blu-ray: Includes The Following All-New Bonus Features Plus All The Classic DVD Features:

So, do yourself a favor and pick up this fantastic Incredible family film that is full of action, comedy and a great musical score.