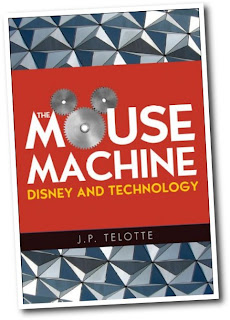 The Mouse Machine: Disney and Technology

The Mouse Machine was a book that I was very excited to start reading. With a lot of books, you have a certain notion of what to expect between the covers; at first, this book disappointed the theme park fan inside me. When I really got my teeth into it, I realized that this is a work geared towards two types of people: Walt Disney (Company) enthusiasts and animation/film buffs. The theme parks are covered, but in the audio-animatronics area, mainly. Most of the work is dedicated to covering the advances that the House of Mouse created or stumbled upon during its sojourn into popular culture.

Obviously, several high points in the Company’s history take precedence: sound, color, multi-plane and special effects are all covered in great detail. The book takes a while to get going and I was tempted to put it away several times; I am glad that I continued. After the first several chapters, you get used to the academic style and start to enjoy and think about the concepts. Telotte’s intent was to create a work that showed how the technological leaps were not only to heighten the art form, but also acted as a link to technology and popular culture.

The aim of this book is to follow the company’s lead in this regard, to offer a selective look at some of those, often-unseen–or unconsidered– technological supports or developments that, in film, television, and the theme parks, have been crucial to the success of the Walt Disney Company and, at times, also a clue to its limitations.
–pp. 2-3.

Ub Iwerks and Walt garner special focus, but Telotte also looks at the other pioneers in the various film departments. A lot of time is spent in looking at the development of the animated shorts–how they changed the industry technologically and artistically. Telotte does seem to have a fondness, not only for technology, but for popular culture. The other major section of the book concerns the development of special effects for 20,000 Leagues Under the Sea. He also looks at the development and similarities between 20,000 Leagues and The Black Hole. He offer his thoughts on why the first was a success and the latter, a failure. When Telotte discusses the major technological advances of the company, he does hit all of the milestones of the animation and film development. In the chapter on the theme parks, the focus is on a few of the modern attractions, like: Dinosaur, Alien Encounter and the Indiana Jones Stunt Spectacular. Most of the seminal theme park attractions are mentioned in passing or as antecedents with nothing more notable than as technological steps. Telotte tries to show the reader how society accepts the technology of the theme park attractions as part of the show instead of just as technology.

The chapter titles give a good impression of where the title takes us:

There is much more to the work than I could cover in a review. Telotte advances many thoughts and concepts that lead to more critical thought about the company. Comparing what Telotte has written to the majority of the Disney literature and you find a competent and exciting work–you just need to get used to the writing style. Most works cover just the people and the art, while we see another side of the company through The Mouse Machine.

Bottom Line: This book is for the animation/film and Disney Company enthusiast. The tone is very heady and academic; most theme park-only fans will not find much of interest. Overall, Telotte adds a very solid work to the body of knowledge on the Walt Disney Company. I am glad I have the book and it adds new perspective to how we think about the monumental progress that the Walt Disney Company is known for.

One thought on “Book Review: The Mouse Machine: Disney and Technology”