We continue our series Celebrating 40 Years of Walt Disney World History with one of the trading cards that was released to celebrate the 100 Years of Magic campaign in 2001. Let’s step back in time and see how the Disney Company celebrates one of the most important milestones in their history. 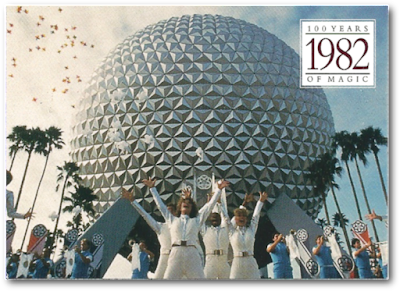 Calling upon WaIt’s vision, Epcot® (Experimental Prototype Community of Tomorrow) was created with the help of hundreds of scientific and historical experts to ensure accuracy of the technology used and displayed. With its fiber optics, lasers, computers, and water controls, the park opened on October 1, 1982 with five times the amount of special effects used in the MAGIC KINGDOM® Park.

1982 – Columbia completes its first mission in space; it is the first space shuttle, which allows vehicles to be reused in space missions.
1982 – An Audio-Animatronic walks for the first time. 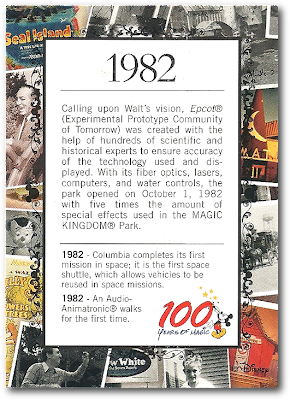 October 2011 marks the 40th anniversary of the opening of the Walt Disney World Resort in Orlando, Florida. The Vacation Kingdom has seen a lot of changes over the past four decades and the editorial staff at Imaginerding wants to celebrate the unique and rich history of the resort with a series of posts. A very special thanks to Celeste Cronrath for designing the series of logos. Make sure to follow her on Twitter.
Don’t forget to stop by our site and leave some Disney Geek love!