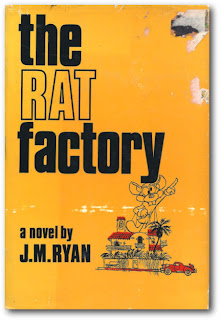 I ran across this title in an article written by Jim Korkis when he announced that he had been writing under the nom-de-plume of Wade Sampson at MousePlanet.

Here is what Jim had to say about the book:

In 1971, the year Walt Disney World opened and Roy O. Disney died (and some felt marked the beginning of the end for Walt’s dreams), a novel was released titled The Rat Factory by J.M. Ryan. This comedic tale is a colorful account of a young artist named Ambrose who works at the Sampson Studios in Hollywood in the 1930s and his various exaggerated struggles. The studio produced popular animated cartoon characters including Ricky Rat, Dizzy Duck and Halfwit Hog. These well beloved icons were the creation of the fictional Wade Sampson, a thinly-veiled and often unflattering surrogate for Walt Disney.


The author, J.M. Ryan, was in fact a pseudonym as well. The novel was written by John Richard McDermott, who worked as an artist at the Disney Studio on Hyperion in the 1930s. Intertwined in an improbable storyline were McDermott’s memories and perspectives of working at the Disney Hyperion Studio.

Jim’s mini-review is a lot more positive than I am about the book. It is obvious that McDermott did not enjoy his time working at the fabled Hyperion Studio and saw Walt Disney as a self-absorbed and egomaniacal studio head. Our here in the book, Ambrose, is a Midwestern transplant that was his town’s only artistic hope. As Ambrose begins his tenuous (and ultimately short-lived) career, you are proffered a picture of an animation studio that is resting on its laurels and surviving by charging their employees for everything. When Ambrose wants to start dating the starlet-hopeful and former majorette, Darlene Barff, she refuses to acquiesce to his romantics pinings until he gets a car. This leads him to lease a car from the Wade Sampson Studios using the Wade Sampson E-Z-thru-the-Nose Payment Plan. Including cutbacks, firings and reducing salaries, you can sense that McDermott did not feel particularly enamored of Walt Disney.

I had high hopes for this title; I assumed it would be a detailed look at what it was like to work under the neon Mickey Mouse sign during the 1930s. Tales of sweatbox sessions, story meetings and learning the ins and outs of early studio life were running through my thoughts as I started the book.

INTEROFFICE WARNING
SUBJECT: CHEATING
It has come to the attention of this command that members of this command have been employing half-dollars as a mechanical aid in drawing Jerky Jack’s head. This practice, being in contravention of the Coin of the Realm Misuse Act, State of California; 1921, will cease immediately. All personnel unable to achieve a pencilled circle free of hand and without artificial aid shall attend evening circle class, Monday through Wednesday in the Annex. Anyone dippy enough to persist in this tasteless practice after this unparalleled warning, shall be dealt with in unstinting fashion.

Overall, the book is a huge disappointment and I would only recommend it to the die-hard Disney book collector. Not to animation fans nor animators. There is absolutely nothing redeeming in The Rat Factory.It was actually quite painful to read and I was glad to finish the book so I could file it away. Besides, it took me over three months to work up the desire to even write this review!