Nausicaa of the Valley of the Wind was the film that led to the creation of Studio Ghibli.

What? You aren’t familiar with Studio Ghibli? Spirited Away?  My Neighbor Totoro? Ponyo? Kiki’s Delivery Service? The Cat Returns? Castle in the Sky? Howl’s Moving Castle?

Hayao Miyazaki is one of the most acclaimed modern animated filmmakers and is one of the founders of Studio Ghibli. The Walt Disney Company has the rights to worldwide distribution of all Studio Ghibli output. Plus, John Lasseter is a huge Miyazaki fan.

The film is based on the first two volumes of the entire seven volume series of manga that was produced between 1982 and 1994. It opens 1000 years after an apocalyptic event that destroyed the  world’s ecology. The air, in most places, is poisonous and mankind struggles amongst themselves and the gigantic insect population to foster a foothold. 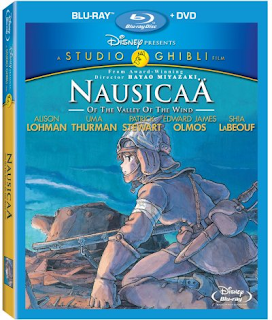 Nausicaa is the main character and would set the trend of Miyazaki having strong female leads in most films. It is also a strong morality tale of environmentalism and seeking balance with nature. We will see these themes often.

The film is gorgeous and a superb example of how amazing hand-drawn animation can be. Many hardcore fans will insist that you watch the film in Japanese with English subtitles. Disney has done a fantastic job of matching voices, though, and it is a great experience either way.

Along with Princess Mononoke, I would hesitate to recommend this film for families due to the more realistic violence and the gigantic insects.

Now if you are a Miyazaki fan, then this is a perfect addition to your Studio Ghibli library.

Cory at Voyages Extraordinaires offers a lot of insightful posts about Studio Ghibli (he even visited the Ghibli Museum in Japan).

I received this Blu-ray as a review copy.