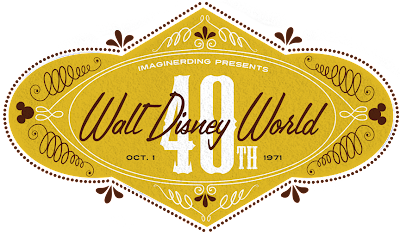 October 2011 marks the 40th anniversary of the opening of the Walt Disney World Resort in Orlando, Florida. The Vacation Kingdom has seen a lot of changes over the past four decades and the editorial staff at Imaginerding wants to celebrate the unique and rich history of the resort with a series of posts. A very special thanks to Celeste Cronrath for designing the series of logos for our posts. Make sure to follow her on Twitter.

Howdy Partners. For your safety, remain seated with your hands, arms, feet, and legs inside the article and be sure to watch your kids. If any of you folks are wearing hats or glasses, best remove em’ cause this here is the wildest ride in the wilderness!

Julie Svendson interviewed Walt Peregroy in December 2007. The amazing (and long) interview was published in Volume 9 of the Walt’s People: Talking Disney with the Artists who Knew Him series by Didier Ghez.

Every celebrity in the world has gone through Disneyland, I’m sure, and I’ve done things there but there’s nothing obvious. But the two pavilions at Epcot are very apparent. You can’t go there without seeing them. And I have this delusion—they could take any piece out of the Symphony of the Seed, very carefully lift it out and put it outdoors or indoors and, with colored lights, it could be a fantastic, contemporary piece of sculpture. But museum curators, art critics, they insult Disney and all of us who work for them saying it’s Mickey Mouse and it’s not true. That’s what they think.

Walt Peregroy worked for the Disney Studios from 1951-1964 and 1974-1983. At the Studios, he worked on Lady and the Tramp, 101 Dalmatians, Sleeping Beauty and others. His last six years with the Company were spent working at WED on designs for EPCOT Center.