Walt Disney’s Missouri: The Roots of a Creative Genius

Walt Disney’s Missouri chronicles the time that Walt spent in Marceline (1905-1910) and in Kansas City (1911-1923). The authors all have a local tie to Missouri: Burnes and Butler both worked for the Kansas City Star and have published other books; Viets is a lawyer, author and Disney historian. 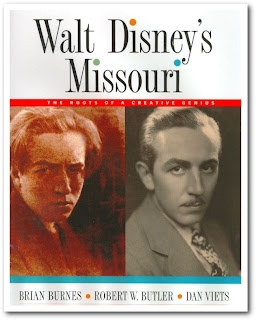 In reading on Disney’s life, I have found that the majority of work on Disney focuses on the periods starting after Steamboat Willie. A lot of sources mention the Kansas City Film Ad Company and Laugh-O-Grams, but they rarely get into the details of Disney’s time in Missouri. Anyone with a passing interest in the formative years of Disney needs to own this book.

Throughout the book, we are introduced to people and places that were influential in Walt’s life. During the Marceline years, we meet Walt’s family members, a favorite teacher and Marceline landmarks. The authors share family anecdotes related to the years in Marceline to paint a portrait of an artist as a child developing a love for mid-western life, animals and family.

The sections on Walt’s time in Kansas City are very detailed and offer many insights. Again, the authors introduce us to people and places that would be influential in developing his talents and views. Various business owners are profiled and how they helped Walt gain insight or shared new techniques. Landmarks are included and one that surprised me was Electric Park; the authors surmise that Electric Park was an influence on Walt’s thoughts for Disneyland–looking at the photos, you can see the correlations.

A Year at Laugh-O-gram and Animation and Animator’s in Disney’s Times chapters were both very enjoyable sections that take an in-depth look at the fledgling studio and its productions. The artists are profiled and the roster reads like a litany of animation greatness: Ub Iwerks, Carl Stalling, Isadore Freling, Hugh Harman, Rudolph Ising and Joseph Benson “Bugs” Hardaway. A picture is presented of a young, talented and monetarily strapped group of artists that were creating art, developing new techniques and having a great time.

The final sections look at Disney’s plans for revitalizing St. Louis with a themed riverfront area and the many times Walt and Roy returned to Kansas City and Marceline for functions, awards and dedications. The proposed floor plans for the St. Louis project are very exciting and wistful. Had the project succeeded, Walt Disney World would probably not exist as we know it. But would this have sent Walt Disney Productions into the urban re-development and re-vitalization industry?

My sole complaint about the book lies in the author’s attempt to make it accessible to the lay reader through fabrication of events from a typical day in order to shed light on what Walt’s life might have been like. The author’s predicate those segments with the statement that they are making an assumption based on a multitude of facts. In creating a book that can be used as a reference work, I would like to see the author’s present facts and not an actualized account of Walt’s life. That being said, the book is very accessible while weaving an academic study of Walt’s early years.

When I stack this title against other works, I really appreciate the unique approach that the authors took. The detail that is shared about the daily life in Marceline and Kansas City is impressive and you are left with a very vivid picture of the birth of an entertainment company. This is a valuable resource for Disney enthusiasts and researchers, especially those interested in Walt’s formative years. The photographs and maps that are gathered and presented are astounding. Many are from the private collections of the authors and won’t be found anywhere else. Overall, the design is well-thought and attractive. This is a book that you will be reaching for often and will enjoy re-visiting.