The following letter from Roy E. Disney was included with a copy of Disney’s Aladdin: The Making of an Animated Film that I recently acquired. After the success of Beauty and the Beast and its subsequent Academy Award Nomination, Roy sent out a letter and a copy of the Aladdin book by John Culhane to entice Academy members to see Aladdin and vote for it in the Oscar race. 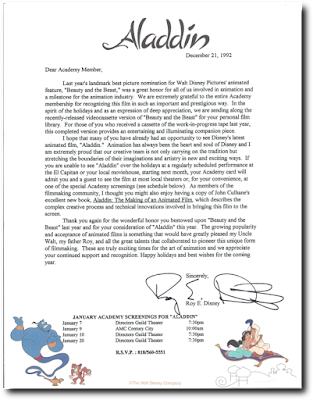 Last year’s landmark best picture nomination for Walt Disney Pictures’ animated feature, “Beauty and the Beast,” was a great honor for all of us involved in animation and a milestone for the animation industry. We are extremely grateful to the entire Academy membership for recognizing this film in such an important and prestigious way. In the spirit ofthe holidays and as an expression of deep appreciation, we are sending along the recently-released videocassette version of “Beauty and the Beast” for your personal film library. For those of you who received a cassette* of the work-in-­progress tape last year, this completed version provides an entertaining and illuminating companion piece.


I hope that many of you have already had an opportunity to see Disney’s latest animated “Aladdin,” Animation has always been the heart and soul of Disney and I am extremely proud that our creative team is not only carrying on the tradition but stretching the boundaries of their imaginations and artistry in new and exciting ways. If you are unable to see “Aladdin” over the holidays at a regularly scheduled performance at the El Capitan or your local moviehouse, starting next month, your Academy card will admit you and a guest to see the film at most local theaters or, for your convenience, at one of the special Academy screenings (see schedule below). As members of the filmmaking community, I thought you might also enjoy having a copy of John Culhane’s excellent new book, Aladdin: The Making of an Animated Film, which describes the complex creative process and technical innovations involved in bringing this to the screen.


Thank you again for the wonderful honor you bestowed upon “Beauty and the Beast” last year and for your consideration of “Aladdin” this year. The growing popularity and acceptance of animated is something that would have greatly pleased my Uncle Walt, my father Roy, and all the great talents that collaborated to pioneer this unique form of filmmaking. These are truly exciting times for the art of animation and we appreciate your continued support and recognition. Happy holidays and best wishes for the coming year.

*A cassette is how people watched movies before DVD and Blu-ray!