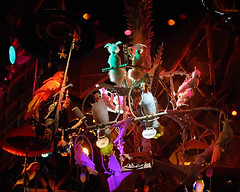 Image by Express Monorail via FlickrLook to Disney to open the Advetureland Veranda soon with an improved menu.

Roasted parrot, hornbill and various other birds of paradise will appear shortly on the updated menu.

In other news, a fire broke out in the Enchanted Tiki Room: Under New Management attraction at the Magic Kingdom in Walt Disney World on Wednesday, January 12, 2011 at 5:30pm.

An uncredited and very reliable resource has confirmed that Iago 1, Zazu and the bird mobile were damaged in the fire. Iago 1 was damaged irreparably. Iago 1 is the animatronic that is there for most of the show, not the one that is already charred from Uh-Oa’s spell (the pre-burnt Iago sits above the EXIT sign).

Let’s hope that Disney will take this opportunity to return the Enchanted Tiki Room to Old Management.

DisKingdom Discussion Kingdom on twitter
UPDATE #2: Cast Member also said they’re going to do a refurb now since it’s down from the fire. (info thanks to @Laurabearz)

Make sure to check out Ryan’s post about the Adventureland Veranda at the Main Street Gazette. He has some great pictures.

8 thoughts on “Fire Sale at The Enchanted Tiki Room, Under New Management”