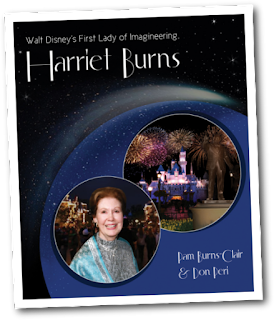 Harriet Burns. Her name is synonymous with Imagineering and the creation of early Disneyland. Not only was she one of Walt’s first Imagineers, but she was the first woman in Imagineering, hence her title, the First Lady of Imagineering. She worked on the development of Sleeping Beauty’s Castle, Pirates of the Caribbean, the Haunted Mansion, the 1964-65 New York World’s Fair and countless other rides, attractions and resorts. Harriet retired in 1986 after 31 years of creating magic for the Walt Disney Company.

Joanne Campbell wrote about a trip to Walt Disney World with Harriet Burns in the early 1990s:

The following morning Harriet had made reservations at a park restaurant she knew served the famous Mickey Mouse pancakes. She insisted on paying the bill because she said that her Disney card would entitle her to a discount. Of course we thanked her, but we didn’t think too much of it. When she presented her card to the waiter, she said she hoped it was alright, because this card was actually from California. The waiter disappeared for some time, and suddenly the manager appeared. He was quite perplexed and said, “Mrs. Burns, was everything satisfactory? Michael [Eisner] usually alerts us when you’re on the property!” With that, OUR eyes popped open in amazement, and we began to realize that the term Imagineer (and her #7 on the credit card) was something extraordinary.

Because Harriet was retired at this point, she herself had not seen MGM, which had just opened in Orlando. We hopped on a double-decker English bus with the throngs, and hadn’t gone too far before Harriet said, “Look, boys, there is the old airplane that Bill and I rode to New York with Walt in for the World’s Fair!” My husband and I exchanged looks, and sure enough, the tour guide then said, “and THIS is the plane that Walt took to the World’s Fair.”–p. 42, Walt Disney’s First Lady of Imagineering

The book is replete with stories that will touch your heart. It is so much more than a tribute book to Harriet, it is also a look at how special and amazing it was to be one of Walt’s Imagineers. This book is perfect for anyone interested in Imagineering, Walt or the amazing people that were fortunate enough to meet Harriet. She was an inspiring woman!

Pam Burns-Chair, Harriet’s daughter, worked with author and Disney Historian Don Peri to create and compile this list of eulogies and tributes by family, friends and Disney employees. 67 essays, ranging in size from a few paragraphs to several pages help tell the story of how Harriet touched so many people’s lives. The book is filled with over 200 photographs that span Harriet’s life and her career at Disney.

After reading  this marvelous title, I felt like I had the opportunity to meet Harriet through the eyes of her family and friends. She was well-loved, respected and admired. Some of the best anecdotes were supplied by former Imagineers that had developed a special relationship with Harriet. She was known for having an off-color sense of humor that seemed to be in opposition to her native Texan drawl. Many of the Imagineers wrote that Harriet was personable and never forgot anyone she met.

Chelsea Clair, the daughter of Pam and the granddaughter of Harriet, designed the book. She did a wonderful job of laying out the pages and integrating the photographs into the text. Pam, Don and Chelsea should be very proud of the book they put together in honor of Harriet. Their love and the love of Harriet’s friends and family.

I would also be remiss if I didn’t mention Scott Wolf, Disney Historian and owner of MouseClub House Scott helped with the project and created the website for the book at Imagineer Harriet.

You can also be come a Fan of Imagineer Harriet on Facebook.

This is a sentimental and beautiful look at Harriet Burns and her life in and outside of Disney. Look at Walt Disney’s First Lady of Imagineering: Harriet Burns as more than a tribute; Pam and Don have compiled stories that give you an intimate look at what it was like to work for the Walt Disney Company with Walt and the heralded Imagineers.

The book provided was a review copy from the publisher.