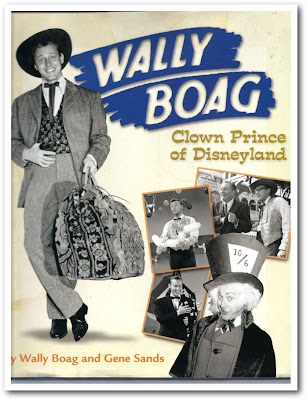 More than a biography, this book is a work-ography of the career of the amazing Wally Boag.
Wally Boag performed at the Golden Horseshoe at Disneyland for a remarkable 27 years. He debuted at Disneyland on opening day, July 17, 1955. Prior to that, he had spent 15 years traveling the world performing for the King and Queen of England, on the Ed Sullivan show and at clubs on different continents. By his own right, Wally Boag was a star before he joined the Golden Horseshoe Review. He depicts a time in the world where performers spent most of their time on the road and rarely settled down. Thank goodness his two-week contract at Disneyland lasted for more than 27 years! You do get a good idea of how much work went into the life of a comedic artist that also incorporated dancing, singing and balloon animals.
Clown Prince chronicles Wally’s life from his birth in 1920 to the publication of this book. Along the way, we meet family members, cherished performers, friends, Walt Disney and other important people in Wally’s life. This book is more than a memoir; it is a scrapbook of a very talented artist. With an average of two photos per page, I would estimate that there are over 200 images. Family and performance photographs, clippings and letters attest to his astounding career.
Wally spent 27 years at Disneyland–with a few years at Walt Disney World and Tokyo Disneyland–and was there during the time when all Walt wanted was to make Disneyland the best it could be. Castmembers were given a freer reign and allowed to develop ideas for new shows and skits. In one more famous tale, Wally recounts the creation of the gunfights in Frontierland. He approached the Frontier Lawmen, Marshall Lucky, about staging gunfights:

I would call him out, throw a couple of insults at him, and we would pace off and draw. He, of course, would win. I’d do a dramatic fall and roll over. The people loved it! So did Walt. He saw us do it one day and said, “That’s great! Do it whenever you feel like it.” So, I enlarged our plot by getting up on the roof of the Horseshoe so he could shoot me off of it. We even did some shoot-outs on the railroad circling the Disneyland Park. It was fun doing it, but one day a young man with a clipboard came to see me at my dressing room and informed me that I was scheduled to do gunfights at 1:00, 3:00, and 5:00 pm. I told him that it was becoming too much for me to do in addition to my five shows a day at the Horseshoe. Instead, I thought it would be a good idea for them to hire some professional “bad guys.” He took my advice and the gunfights became a regular part of the entertainment in Frontierland.
—Wally Boag, The Clown Prince of Disneyland, p. 88.

This book is marginally similar to Van Arsdale France’s Window on Main Street. They are both fantastic works about working and playing at Disneyland. Van Arsdale presents a behind-the-scenes look while Wally talks about life on the stage. Given my druthers, I would recommend Wally’s book for the humor, heart and soul that is Wally Boag. Wally paints a very intimate picture of working at the Golden Horsehoe and recounts stories that you won’t hear anywhere else.

I have always known of Wally Boag, but it wasn’t until I saw the ten-year anniversary special on the Walt Disney Treasures – Disneyland – Secrets, Stories & Magic DVD, that I realized how spectacular Wally was. Even though the gags and one-liners were over 40 years old, he still had us in stitches. Viewing the Golden Horseshoe Review made me long for a time machine to transport me to the Disneyland of the 1960’s
Wally can still be heard today as the voice of Jose at the Enchanted Tiki Room and as the voice in the Toucan and Parrot Show (The Electronic Utility Show) on the Walt Disney and the 1964 World’s Fair 5-CD set. He also helped create the dialog for both shows.
If you have an interest in Disneyland history, vaudeville or learning more about working at Disneyland during its infancy, then this book is for you. I really enjoyed every page of the Clown Prince and I know it will make a valuable addition to your library.
You can purchase copies of the book at WallyBoag.com.