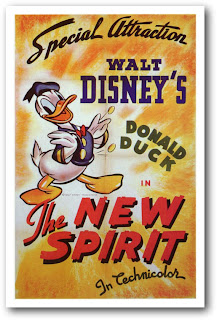 Charles Solomon, author and animation historian, has written an amazing tome about the history of animation. His 1994 book, Enchanted Drawings

, is a must read for anyone interested in animation. In addition to covering Disney-related works, Solomon covers all of the familiar Warner Brothers, MGM and UPA cartoons. It is also one of the best resources for learning about the earliest inklings of animation (pun intended).

During World War II, as part of the overall war effort, many studios were recruited by the War Activities Committee of the Treasury Department. With many foreign markets frozen and many artists sent to war (or working for military animation units), the Hollywood and New York Studios found themselves strapped for cash, salable product and artists. In most cases, many of the studios would have  folded (and some did) during the war.

The following quote about the different studios during the Second World War was rather intriguing, especially since it sounds so similar to what we see today. Solomon discusses how the government of the time responded to the production costs of The New Spirit

, a film about the patriotic duty to pay income taxes. Seems like nothing ever changes, does it?

However, the Treasury Department had to requests a special allocation from Congress  to pay the $80,000 bill for the film ($40,000 in production costs, and an equal amount for 1,000 Technicolor prints). The request arrived as Republicans were looking for examples of Democratic overspending. Congressmen denounced the $80,000 expenditure as an outrageous boondoggle, and the subsequent debate unleashed a storm of unfavorable publicity. Disney received letters accusing him of profiteering.

These charges were completely unfounded. Disney had donated his services, and the $40,000 figure was about $7,000 below his annual production costs. In addition, the studio lost at least $40,000 more in film rentals when theater owners showed “The New Spirit” (which they got free) instead of a Disney cartoon they would have paid for.