Another entry in the 100 Years of Magic Celebration. Not quite a slap in the face (but pretty close), Disney shares the iconic image from Tokyo DisneySea. Arguably, this theme park is considered the best theme park ever designed and executed. It was also closely tied to the initial designs for the Port Disney / Westcot park that would have been a second gate to Disneyland Park. 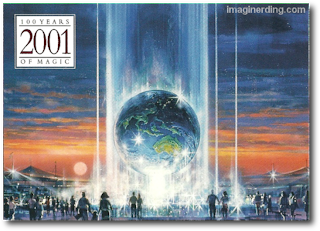 TOKYO DISNEYSEA®, which overlooks Tokyo Bay next to TOKYO DISNEYLAND®, opened its gates on September 4, 2001. Here, Guests can explore the myths, legends and lore of the ocean in seven distinct “ports of call.”

The coming year will be a fun-filled celebration, as we honor the 100th Anniversary of Walt Disney’s birth.

The colossal Sorcerer Mickey hat at Disney-MGM Studios is the centerpiece of the celebration. Interactive kiosks at all four parks will offer inspiring opportunities to explore the history of Disney and discover fascinating surprises.

This year’s celebrations promise more fun than ever before. Disney imagination promises wonderful new resorts and attractions, and much more festivity in the years to come. 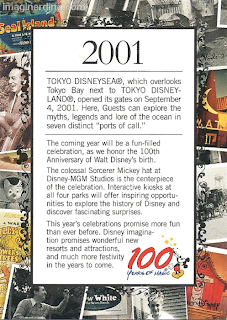