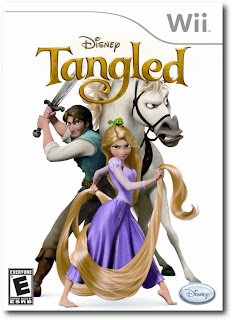 Disney Tangled, a review by a seven year-old.

What Do You Do In the Game?
You try to get Rapunzel back to the Castle where she belongs.You do games to help people in the game like helping Tor protect his flowers in Flower Defense.

What Do Flynn and Rapunzel Do in the Game?
Flynn can knock out the bad guys and they disappear with a sword. Flynn can cut down the thistles so Rapunzel can get through. Rapunzel uses a frying pan to knock them out. Rapunzel can grow flowers to find insects, birds and flowers. Then she draws them in her book. She uses her hair to swing to get into places and help Flynn climb up.

Who Will Like this Game?
Both boys and girls can play. Dads and moms will like playing too.

Why Will Boys Like this Game?
Because Flynn is fun. The mini-games are fun. When I played with my dad, he was Flynn and I was Rapunzel and it was still a lot of fun!

Will Girls Like the Game?
Yes, of course they would! 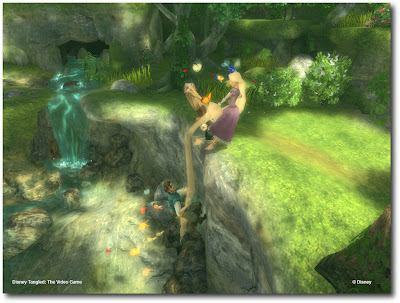 A Parent’s Perspective
We are a gaming family. We have two Xbox 360s, a Nintendo Wii, two DSI XLs and several computers. Our kids have grown up with games and they are a part of our family time. We love multiplayer games that foster a sense of adventure and teamwork. Surprisingly, this game excels in the area of cooperative play. The characters have different skills and you need both to complete the level. Also, each character collects a different item: Flynn grabs coins and Rapunzel picks up sundrops. I loved this! There was no competition to get the items before your partner did. The coins and sundrops also act as your health. When you stun an enemy they lose coins and sundrops; conversely, your character loses coins or sundrops if you get stunned or knocked down.

Most co-op games inspire a bit of evil camaraderie. Disney Tangled is a true co-op game. When your characters wander two far away from each other, the screen splits and magically merges back when you get close. It was disorienting at first, but made the gameplay that much better. It is really a good setup for parents and young children to play together. If the kids get stuck, you can guide them or switch characters on-the-fly to get out of a jam. We have played “family-style” games before where one person got left behind and their character died. It was very frustrating. With Tangled, we never got stuck or lost. We just followed the coins/sundrops and looked for places for Rapunzel to let down her hair!

Most of the gameplay is split into two major types: sidescrolling levels and mini-quests. The mini-quests can get fairly redundant, but should keep most younger children engaged. (You know…go get this cup and I will give you the key, etc.) The graphics are well done and look similar to the film. The cutscenes are very enjoyable and follow the artwork that Rapunzel did in the films. You can also play the game with or without the nunchuk attachment.

Disney Interactive furnished a copy of this title for review.