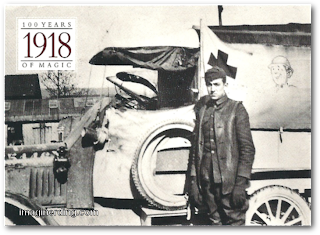 Another entry in the 100 Years of Magic Celebration Trading Card Series. This time, it is 1918 and our boy Walt is standing in front of an ambulance in France. Notice the drawing of the doughboy on the canvas of the ambulance. The Walt Disney Family Museum has a replica of the ambulance in its gallery. 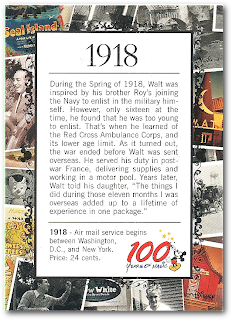 During the Spring of 1918 Walt was inspired by his brother Roy’s joining the Navy to enlist inthe military himself. However, only sixïeen at the time, he found that he was too young to enlist. That’s when he learned of the Red Cross Ambulance Corps, and its lower age limit. As it turned out, the war ended before Walt was sent overseas. He served his duty in postwar France, delivering supplies and working in a motor pool. Years later, Walt told his daughter, “The things I did during those eleven months I was overseas added up to a lifetime of experience in one package.”
1918 – Air Mail service begins between Washington, D.C., and New York. Price: 24 cents.