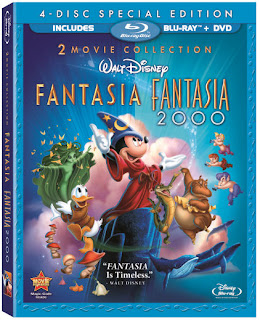 The Fantasia / Fantasia 2000 (Four-Disc Blu-ray/DVD Combo) package has some fantastic bonus features! There’s not much I can say about the films that animation critics and historians haven’t already stated. Simply that the films are gorgeous on Blu-ray and deserve a fresh viewing in high-definition.

What captivated me were the bonus features! Hands down, the most exciting were the tour of the Walt Disney Family Museum and the Shultheis Notebook. I have highlighted some of the best features below. In particular, the Shultheis Notebook was very eye opening; imagine discovering a treasure that no one knew existed! Also, woven throughout the features were interviews with some of my favorite bloggers and authors: Dider Ghez, Michael Barrier, John Canemaker, JB Kaufman, Brian Sibley, Charles Solomon and more!