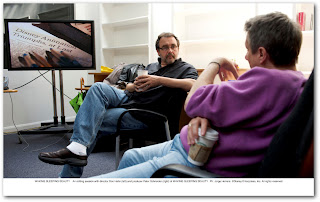 Don Hahn and Peter Schneider, both modern heroes in the pantheon of Disney animation, offer this remarkable tale of the rebirth of the animated feature film. Waking Sleeping Beauty (WSB) tells the story of the Walt Disney Feature Animation Studios from 1984 to 1994; more than just a litany of facts and photos, WSB is a testament to the artists and executives that created some of the biggest and most memorable animated films in history.

The film opens with images of Michael Eisner and home video footage of the studios from 1980. You meet a ragtag group of young animators who seem to know that they are in a hollowed environment yet seem to be without a rudder. As the story unfolds, we meet the three major players in the film: Roy E. Disney, Michael Eisner and Jeffrey Katzenberg. Most Disney enthusiasts are familiar with the conflict that developed between the three, but WSB provides such a greater nuance to the machinations of the executives. We quickly discover the roles being played by Eisner, Katzenberg and Disney–the heavy, the upstart and the traditionalist (and soul of the company). 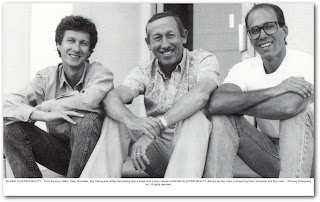 I was surprised at the honesty and apparent truthfulness to the film. Hahn, who was involved with the majority of the releases during the time period, does his best to tell an exciting and unbiased story. Granted, he is one of the artists as opposed to the executives, but it is obvious that Hahn was more concerned that the film succeeds in telling as much of the story as possible. One of the unsung heroes of the film is the late Frank G. Wells. Schneider and Hahn spend time proselytizing the former President and COO; Wells was truly loved and admired. Reading anything about the company post-Eisner and you will see the same theme: the death of Frank Wells really shook Eisner in confidence and ability.

The producers spend a lot of time focusing on Howard Ashman who passed away in 1991, shortly before the release of Beauty and the Beast. Ashman and his songwriting partner Alan Mencken were responsible for the change in direction of the Disney animated feature. Ashman pushed for a return to the animated musical. Ashman believed that music is central to what Disney animation is. In the film and the bonus features, he is referred to as the next Walt Disney. A scary, but very heartfelt appellation. 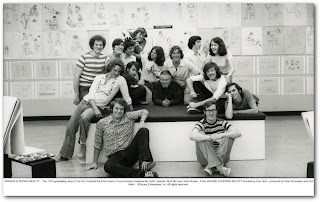 The film is told through a unique viewpoint. Instead of using archival interview footage with random talking heads, Hahn had the idea to use historical photos and videos with various voice overs from key persons. Hahn and Schneider tackle a very touchy subject and partway through the film, you wonder if they were going to make enemies. They address this in the bonus features, stating that they told the truth and were personally involved–that they wanted to show everything, including the warts!

Anyone who is a fan of the movies released during this time period will enjoy Waking sleeping Beauty. It is so much more than a documentary about the people; it is a heartfelt and emotional journey into the politics and infighting of the Disney Studio at the time. And above it all, amazing animation was produced. Which Hahn notes, is really what people will remember.