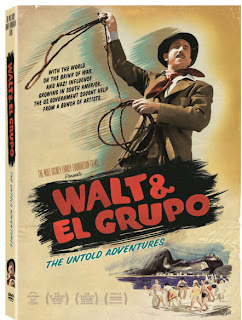 Walt & El Grupo is finally on DVD and this is every Disney geek’s dream film.

Directed by Theodore Thomas, this film is an important look at a singular year and event which defined a Studio, a man, his artists and the direction of the company. Frank Thomas, one of Disney’s Nine Old Men and an artist on the trip was Theodore’s father. Theodore also directed the wonderful film Frank & Ollie

about his dad and fellow animator Ollie Johnston. 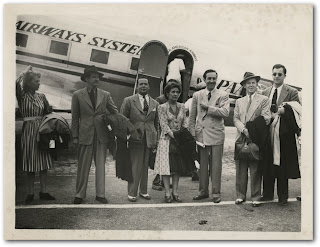 In 1941, Walt was reeling from the Animator’s Strike. He had just opened his new Studio in Burbank, found his European funds cut off from the war and he needed to downsize the staff. The US Government had created a new department, the Office of Coordinator of Inter American Affairs (CIAA) in order to strengthen relationships between the United States and their neighbors in South America. Oil Magnate Nelson Rockefeller was in charge of the CIAA and used the offices for two main purposes: to foster goodwill with South American countries through ambassadors and goodwill trips; to keep an eye on foreign investments (oil and hotels).

Walt was given a $70,000 grant by the government for the goodwill tour, but he knew there would be long term fiscal rewards for befriending the populace in South America. It was also a tactical ploy by FDR to try to remove Walt from the situation to lessen the stress of the animators’ strike. While Walt, his wife and 16 key Disney animators were on the goodwill tour, Walt’s wife, Lillian remarked that Walt was treated more like royalty than anything else. Children and grown-ups alike heralded the creator of Mickey Mouse (El Ratón Mickey). During the South American tour, the US Labor Department Conciliation Service was able to settle the strike.

Walt & El Grupo is a wonderful look at the South American trip and the events surrounding it. Arguably, one of the most stunning aspects of the movie is how the photographs and artwork come to life on the screen. Since most of the raw material were from photographs and 16mm footage, the filmmakers created photographic images that move and come to life.

Similarly, it is fascinating to see Walt Disney through these images and film clips. Since Walt’s passing, he has attained a rather mythic status; it is wonderful to see how much of a superstar Walt was and how he affected people all over the world. You also catch rare glimpses of his lovely wife, Lillian, and how they interacted.

Part of the charm of the film is seen through the eyes of the individuals that were fortunate enough to have met Walt, through family members or media events. You can still see, 70 years later, how enamored they were of Walt and El Grupo. At first, it seems rather mundane to interview the journalists and people that were brought in as live models, but it helps to paint a larger picture of the trip and its effect. In all there are multiple stories weaved into this film: the political climate, the creation of the films, the goodwill tour and the experiences of the animators involved. The filmmakers visit the places made famous by El Grupo’s visit and offer comparisons to the modern day cityscape and areas.

The bonus features are not as extensive as I would have liked, but the film covers so much ground that there could not have been much left over! One of the interesting inclusions is the full 1942 theatrical release of Saludos Amigos, which had been edited, previously, to remove images of Goofy smoking.

In all, this is a mesmerizing glimpse into working with Walt and his artists during 1941. Each artist is spotlighted during the film, including their contributions to the films and the Studios. Expert insight is provided by animation historians John Canemaker and J.B. Kaufman. Canemaker wrote the seminal work on Disney’s Nine Old Men. Kaufman is the author of South of the Border With Disney: Walt Disney and the Good Neighbor Program, 1941-1948

. Walt and Lilly’s daughter, Diane Disney Miller makes several appearances in the film as well to provide a more familial take on the trip. Diane rarely grants interviews and it was nice to see her talk about her parents and that time period.

This is a movie that will resonate with animation fans, Disney Company enthusiasts and anyone interested in the art and making of Saludos Amigos and The Three Caballeros