The Imagineers have produced another great title about themselves–with tons of behind-the-scenes images and stories. This book should be on every Disney enthusiast’s shelves! 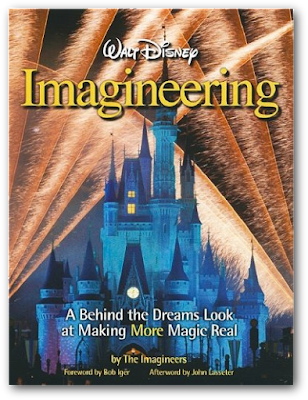 If you want to learn more about it, though, keep on reading.

Walt Disney Imagineering: A Behind the Dreams Look at Making More Magic Real is not an update to the seminal 1996

release; it is a continuation. It is a look at the Magic that the Imagineers have created since the publication of the first book. Any fan of the Disney Company, the Theme Parks, the Resorts, the Animation or creative environments will treasure this book. Filled with more artwork than you can imagine, most of the pages offer paintings, concept art and photographs that have never been published before. Once again, the Imagineers pull back the curtain to reveal the puttering, popping, whirring, spinning and dreaming that they do to create their magic. You also understand that there are many more curtains yet to be revealed, let alone parted!

The book is constructed of three main parts:

Part I Theory
Over the years, Imagineers have developed ideas about creating great attractions for Disney Parks and Resort Guests. Every project team takes into account some basic notions–the unwritten ground rules of groundbreaking creativity.

Part II Tools
Imagineers make use of a variety of resources to create the magic of Disney Resorts and attractions–tools to visualize, analyze, explain and build.

Part III Portfolio
Recent work, and a look at the mosaic of people, talents, ideas, and projects that is Imagineering.

This book is not as groundbreaking as the 1996 version–it offers a more polished and accepted look at the Imagineering process. Considering the time that it was released, in 1996,  there was nothing that brought us inside the folds of Imagineering; nothing that allowed us to venture into the backrooms and creative side of Disney. The current book takes a different path to show how and why the Imagineers create the amazing attractions and resorts. Its focus is largely on the projects and concepts from the past 15 years of Imagineering. This book is not meant to replace the 1996 title, but to enhance it; to bring us further into folds of Imagineering. That being said, the coverage of attractions is very new and modern. There is not much focus on the first 40 years of Imagineering. The majority of the photos and artwork are from Tokyo DisneySea, Disney’s California Adventure and Disney’s Animal Kingdom.

The book is packaged with tissue paper between many of the pages. Instead of offering only large, fold-out pages (like the 1996 book), they have opted for the addition of smaller fold-outs that detail artwork from the same attraction or area. They are like postcard books. There are some amazing, large fold-outs, especially on the Disney Cruise ship. The addition of the extra art really makes the book feel like a family treasure or scrapbook.

Walt Disney Imagineering: A Behind the Dreams Look at Making More Magic Real, in concert with the 1996version, should be on everyone’s shelves. The artwork is astounding; there are pieces of art that you would love to have in your home. The main author, Melody Malmberg, has done a wonderful job with the text. It is informative, clear and does a fantastic job of describing everything that an Imagineer is and does. They have also included an index and a list of resources for further reading.

This is a book that you need to own!

I did receive a review copy of this book from Disney Press.