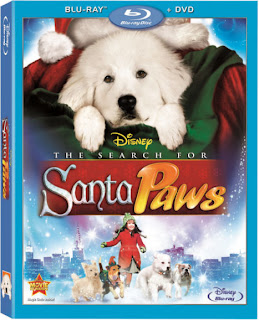 At Imaginerding HQ, reviews of the Buddies series of films is relegated to my eleven year-old Junior Deek. He wrote the following review.

This is a movie I would recommend for families, Dog Lover’s, and kids. It should be longer and much less sad. It does not fit well with the series. The Buddies movies were never this tearful and sad. There needs to be more in the actual buddies series and new puppy adventures. I would give this a 6 out of 10 for not being truthful to the theme, series, and characters, and there was too much emotional stress. Would I watch this movie often? Not likely, I really took a disliking to the movie and the other silly Blue Ray features.

He usually raves over the Buddies releases. You can read his review of Santa Buddies here.

– Disney’s unbeatable and irresistible talking dogs are back – in an all-new holiday movie for the whole family, with THE SEARCH FOR SANTA PAWS. Debuting on Blu-ray hi-def and DVD on November 23, 2010 just in time for Thanksgiving (US 11/25) and kicking off the holiday season around the world, the heartwarming family adventure joins the legacy of great dog-filled tales from the creators of the “Buddies” films, the most popular live-action direct-to-DVD franchise ever.

DISNEY’S THE SEARCH FOR SANTA PAWS is an exciting and uplifting movie from director Robert Vince about the power of giving and the true meaning of Christmas in the tradition of Disney’s classic holiday tales. This big city adventure for the whole family reveals the how the legendary friendship of Santa Claus and Santa Paws began.

DISNEY’S THE SEARCH FOR SANTA PAWS comes with a stocking full of fantastic bonus features, including:

The film follows in the tradition of Disney’s classic holiday tales with a heartwarming story about the power of giving and the true meaning of Christmas. An exciting prequel, the movie allows kids of all ages to discover how the legendary friendship of Santa Claus and Santa Paws began – as it is the inspiring original film (in a timeline it precedes 2009’s Santa Buddies: The Legend of Santa Paws).

In the movie, when Santa and his new best friend, Paws, discover that the boys and girls of the world have lost the spirit of the season, they take a trip to New York City. But after Santa loses his memory, it’s up to Paws, a faithful orphan named Quinn (America’s Got Talent’s Kaitlyn Maher), her new friend Will (The Game Plan’s Madison Pettis) and a wonderful group of magical talking dogs to save St. Nick and show the world what Christmas is really all about. Do you believe in Santa Paws? Experiencing this sure-to-be holiday classic, full of fun, adventure and a carrying the timeless messages of the holidays, with surely delight the entire family!

ABOUT THE DOGGONE POPULAR FRANCHISE
Few things are more appealing, adorable and elicit bigger enthusiasm than man’s best friend. From classic Old Yeller to classy Beverly Hills Chihuahua to animated Bolt, one of Hollywood’s surest ways to delight audiences of all ages lies firmly at the feet of our four-legged friends.

Since the 1997 big-screen debut of the sports-minded Golden Retriever star “Buddy,” audiences have thrilled to the high-stakes antics in the AIR BUD movie series with its fantastic sports-themed adventures including basketball, football, soccer, volleyball and even America’s national pastime – baseball!

A quintet of adorable talking puppies followed the “Bud” movies in 2006, with the highly anticipated launch of the BUDDIES series – and a puppy craze began as AIR BUDDIES became the biggest live-action Direct-to-DVD movie of the year!

Following in those triumphant paw prints, the wise-cracking pups went North to Alaska to compete in a daring dogsled adventure, barking up yet another #1 for 2008, as SNOW BUDDIES crossed the finish line as the best-selling live-action Direct-to-DVD of all time!

Released to Disney DVD in February 2009, SPACE BUDDIES sent the puppies where no dog has gone before, and rocketed another hit into the homes of millions. With SANTA BUDDIES in 2009, director Robert Vince brought the popular puppy franchise to Christmas, with the overwhelmingly popular story that joined the ranks of the Disney dog classics, on the way to becoming the biggest live-action Direct-to-DVD release of the year – again.