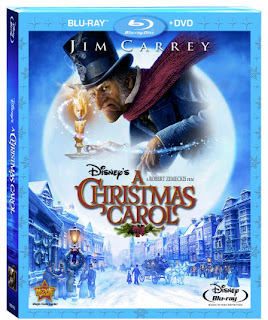 It is rare that a film will be released that I wish that I had seen it in 3D. Disney’s A Christmas Carol has such a depth in the artwork, that even in Blu-ray, the city seems to come alive. I can only imagine how spectacular the film was in 3D.

The film, when released, received criticism due to the MoCap, or Motion-Capture, technology that was used to create the film. Within the first few minutes, I was blown-away by how lifelike the animation actually was. The characters were completely believable and had a sense of authority and realism that you don’t see in traditional and animated films. It is still traditional actors in all of the roles and their movements and facial expressions are tracked and are the basis for the characters.

With the numerous and different iterations of the Dickens’ classic available, you might wonder why you should pick up another version. A point in fact, when watching this film with my youngest son, he kept comparing the film, scene-by-scene, to the 1983 release of Mickey’s Christmas Carol. While watching, I was astounded at how close the movie actually followed the book. This is probably the first time that a true representation of the book has made it to the big screen. The MoCap technology and computer animation bring so many aspects of the book to life that other versions pale in comparison.

My major complaint about the film is the scary nature of the third spirit. It was a very loud, rambunctious and frightening segment of the film. And, honestly, it didn’t really fit with the rest of the movie. Also, the ending seemed rather rushed and I felt like it needed more merriment to help lift it from the darkness of the final spirit.

This film is a great addition to your holiday library, but Mickey’s Christmas Carol

will always rank much higher in our household.