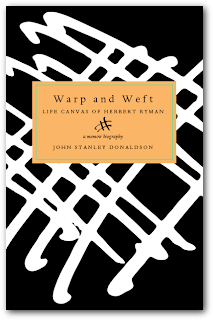 John Stanley Donaldson knew Herbert Ryman for over thirty years. Herb was his mentor and friend; a lifelong companion and artistic brother. When I received a review copy of Warp and Weft, it came with a personal note from John detailing that the work has been derided as inflammatory and sparking ill will among Disney’s old guard. Following many other Disney-related biographies, I wasn’t sure of John’s intent, but I was hoping that his book would not follow the same path as The Dark Prince or the Neal Gabler conflagration. Both titles have been scorned and refuted by the Disney Company and the Disney Family. I am glad to say that I enjoyed the book and John’s unique perspective.

I wish that there were more books like this that cover the Imagineers and artists of the Disney Company. Herbert Ryman was a true legend, not just a Disney Legend, but a remarkable legend that influenced and touched everyone he came into contact with. It is easy to stand here and tell you that there would be no Disneyland or Walt Disney Word, as we know it, without Herb. After reading this lyrical tome, you get a clearer understanding of that statement. Herb, or Herbie, was a truly influential person in the life and career of Walt Disney. There was a level of mutual respect, friendship and camaraderie between the two geniuses.

A commonition to the reader: John’s writing style has been described as lyrical and it does fit the form of an artist’s pursuit of painting with words on paper. The style is beautiful at the same time it can be ungainly for an inexperienced reader. John rhymes his text, which can throw off the structure of the sentence. For many readers, his style will be a turnoff, but I urge you to complete the book.

Still, what is important is that John has put down an amazing story on paper; one that shows the amazing life that Herb led. A world traveler, burgeoning artist and friend to everyone he met. Where John’s tale turns decidedly darker is when you learn about Herb’s sister, Lucille. She and her husband are painted as the heavies of the book. Actually, they are more than heavies, they are sinister with no other compunction except money and making sure that they get what they deserve. In the case of the book, it is every last possession of Herb Ryman. By the end of the book, you will see other Disney legends in an entirely different light.

The tale, as it unfolds, is mesmerizing simply by the cast of characters that parade through the weave of the book. Many famous celebrities are forced into a connection, some tumultuous, with the Disney Company through their associations with any of the Rymans. From Marylin Monroe to drug smugglers in Florida. My favorite parts of the stories were the anecdotes of Herbie’s travels throughout the world. He truly had a worldwide perspective in his art.

This is a book that you have to take a chance on; one that you will need to work through in order to gain its treasures. You will not regret turning the pages, but you will gain a vastly different perspective on Herb Ryman’s life. And on his various colleagues at Disney.

On a personal note, I would like to thank John for the time he spent crafting this biography. He shares many anecdotes about Herb that would be lost otherwise. He also steps forward to advocate for Herb when no one else is able to.

You can purchase the book directly from the author here.